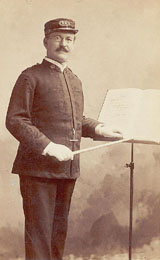 In those days, what is now Times Square was simply known as the Long Acre, and was changed to Times Square in 1904 when the New York Times opened its offices there.

In the late 19th century, the Gilmore Band - part of New York's 22nd Regiment -- was one of the nation's  most popular bands, performing indoor and outdoor concerts throughout the year.  Gilmore conducted many of the concerts nearby at Gilmore's Garden, which later became Madison Square Garden.

On this particular New Year's eve, the  Gilmore Band performed for the large audience that gathered up and down Broadway, and then Gilmore led the crowd in a countdown, firing two pistols at the stroke of midnight.

According to Gilmore scholar Michael Cummings, Gilmore was born in Ballygar, County Galway in 1829, and emigrated to Boston in 1849, where he lived for over twenty years. During that time he established himself as a great cornet player and bandleader.  He was active during the Civil War and wrote the popular tune, When Johnny Comes Marching Home.  He also created two massive peace jubilees in Boston's Back Bay in 1869 and 1872, before moving to New York, where he lived until his death in 1892.

Posted by irishboston.blogspot.com at 11:22 AM No comments:

The Boston Irish Tourism Association is giving away a pair of tickets to see A Christmas Celtic Sojourn at Veterans Memorial Auditorium in Providence on Thursday, December 16, and at the Emerson Majestic Theatre in Boston on Friday, December 17, 2010.

To enter the contest click here.  The contest ends on Tuesday, December 14, 2010, and winners will be announced that day.

Now in its 8th year, A Christmas Celtic Sojourn is a journey back to how Christmas was celebrated in rural Ireland, complete with Irish traditional singing, music, dancing and storytelling.

The popular show is hosted by Brian O'Donovan, whose radio program show, A Celtic Sojourn, is on WGBH-FM every Saturday.

For a complete list of Irish cultural events year round, visit IrishMassachusetts.com.
Posted by irishboston.blogspot.com at 3:30 PM No comments: 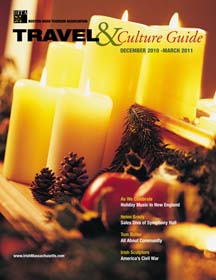 The Boston Irish Tourism Association has released its winter issue of Travel & Culture Guide, a selection of cultural activities in Massachusetts and the New England region.

The issue has details on upcoming Christmas concerts, including Boston Holiday Pops, Christmas Celtic Sojourn, It's Christmas Time by the Reagle Players and holiday shows at the Blackstone River Theater.

There's also a preview of St. Patrick's Day parades and cultural activities in March 2011. And local Irish-Americans Helen Brady of Boston Symphony Hall and Tom Butler of Massport are profiled.

The Guide is distributed free at local visitor centers and Irish venues throughout the state.  For more information on where to pick up the Guide, contact irishmassachusetts@comcast.net.

BITA is a cultural tourism organization that promotes the state's Irish-American culture, history and heritage year round to the convention and visitors industry.  It has nearly 100 members, and works closely with tourism agencies in Massachusetts, New Hampshire, Quebec City, Nova Scotia, Prince Edward Island and Ireland to promote travel and cultural exchange between these destinations.

For year round information on cultural events in Massachusetts, visit IrishMassachusetts.com.

For visitor information, visit MassVacation.com.
Posted by irishboston.blogspot.com at 3:56 PM No comments: