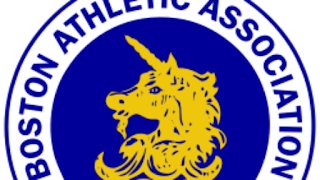 John Boyle O’Reilly (1844-90), known in Boston as an Irish patriot, poet, orator and spokesman for the downtrodden, was one of the founders of the Boston Athletic Association (BAA), in 1887.

In January, 1887, “at the suggestion of the late John Boyle O’Reilly, the first meeting was formed to consider…forming an athletic club in Boston,” wrote The Boston Globe in a March 9, 1912 story on the BAA’s 25th anniversary.  That initial meeting generated excitement and resolve to create an athletic organization, modeled on the popular New York Athletic Club, according to reports.

A few months later, on May 9, 1887, the General Court of Massachusetts passed an act to incorporate the BAA, listing O’Reilly as an official, along with other leading Bostonians like Henry Parkman, George Morrison, George W. Beales, Francis L. Higginson, Richard D. Sears and Harrison G. Otis.


A new book by John Hanc, entitled the B.A.A. at 125 recounts the formation of the group and gives a synopsis of O'Reilly's life and his involvement in the forming the city's most famous athletic organization.

The BAA helped field the first US Olympic team that competed in Athens, Greece in 1896, and also started the Boston Marathon in 1897, a race it oversees to this day.

O’Reilly is best known as a leader of Boston’s Irish community; in his day he was well-regarded as a sportsman, intellectual, and community activist.  He had escaped a life imprisonment from a British penal colony in Australia by hopping on a whaling ship out of New Bedford, MA, and he arrived in Boston  in 1870, where he lived until his death in 1844 from an accidental overdose of medication at age 44.

O'Reilly was an active outdoors man, and taught fencing for a time at Harvard University.  His book, Ethics of Boxing and Manly Sport, published in 1888, defended the controversial sport of boxing, but also delved into other topics like Irish hurling, canoeing, and hints for fitness and nutrition for the serious athlete.

Today, a memorial to John Boyle O'Reilly is located in the Fens at the top of Boylston Street.

Find about more about Boston Irish history by visiting IrishHeritageTrail.com.

Posted by irishboston.blogspot.com at 9:22 AM No comments:

As the Boston Red Sox faced off the Washington Senators at Fenway Park on April 14, 1914, another battle was going on in the stands between newly-elected Mayor James Michael Curley and his rival, former Mayor John "Honey Fitz" Fitzgerald.

""Twenty-four thousand, two hundred and seventy-one persons went to Fenway Park yesterday afternoon to see Mayor Curley throw out the first ball....It was an enthusiastic crowd...eager to cheer and ready to use every excuse to the fullest extent," wrote The Boston Globe.

"The first old-time roar of delight came promptly on the handling of (Senator) Eddie Foster's attempt (to steal base).  One minute later John F. Fitzgerald came in and the real thunders broke loose.  Mr. Fitzgerald looked pleased with the world and sat down modestly in a box near the Red Sox dugout."

Mayor from 1910-13, Fitzgerald had thrown out the ball when Fenway Park first opened in 1912, and again in 1913.  Fitzgerald opted not to run for reelection in 1914 when Curley threatened to reveal Fitzgerald's "well-known dalliance with a blond cigarette girl named 'Toodles' Ryan, who worked at the Ferncroft Inn," according to author Thomas H. O'Connor.

The Senators defeated the Red Sox 3-0 that day.

Here are some Irish connections to Fenway Park, from the book, Irish Boston: A Lively Look at Boston's Colorful Irish History.

Posted by irishboston.blogspot.com at 9:16 AM No comments: