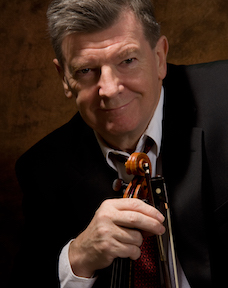 Burke also enjoys a distinguished solo career as a fiddler, and has received numerous awards,  including Ireland’s Traditional Musician of the Year, 2016, and a National Heritage Fellowship, the USA's highest honor for excellence in the folk and traditional arts.

Here is a schedule of upcoming concerts at Blackstone River Theatre, considered one of the finest traditional music venues in New England.

Posted by irishboston.blogspot.com at 11:50 AM No comments: 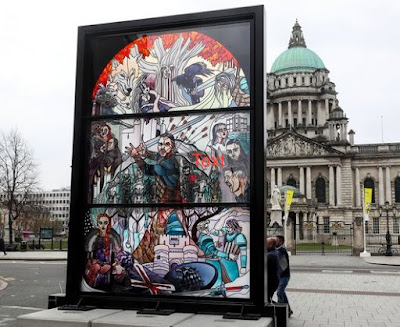 Tourism Ireland unveiled a giant, stained glass window today (15 April) opposite Belfast City Hall in Northern Ireland. The impressive installation is part of a brand new Game of Thrones® campaign – to showcase and celebrate Northern Ireland as Game of Thrones® Territory to millions of fans worldwide. This is the first of six installations to be unveiled over the coming weeks.


Over the coming weeks – as each episode of the final season airs – six beautifully crafted, freestanding stained-glass windows will be installed across Belfast. Each window will highlight a key House from the show, with a series of panels depicting the most exciting and talked-about moments from the entire saga. The first window, unveiled today, is all about the House Stark.
Each window will be large enough for fans to pose in front of, for photos and selfies, so they can recreate their own Game of Thrones® photo opp. They can then share the photographs on social media and encourage their friends and fellow fans to come and visit Belfast and Northern Ireland and experience it for themselves!
The stained glass panes have been designed by hand illustrators and are being stained by an artist in Bangor. By the end of series eight, the stained glass windows will form a new Game of Thrones® trail, leading fans across the city to the final window at the Titanic Studios, where much of the show has been produced.
Find more about visiting Ireland here.

Posted by irishboston.blogspot.com at 9:46 PM No comments: 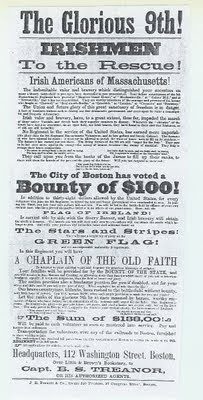 On April 15, 1861, two days after the attack on Ft. Sumter by the Confederate forces,  President Abraham Lincoln issued a proclamation seeking 75,000 volunteers to join the Union Army.In Boston, Massachusetts, Irishman Thomas Cass immediately began recruiting Irish immigrants to form the Massachusetts 9th regiment.  The volunteers came largely from Boston and the nearby towns of Salem, Milford, Marlboro and Stoughton. A total of 1,727 men enlisted. The Irish volunteers encamped on Long Island in Boston Harbor through May, and on June 11 the Regiment was mustered into service.The 9th enjoyed a big send-off on June 25, 1861, when the troops made their way from Long Island to Long Wharf in Boston, then marched to Boston Common, where Governor John Andrew welcomed them and thanked the two commanders, Colonel Cass and Lieutenant Colonel Patrick Guiney. Governor Andrew presented them with flags of the United States and the Commonwealth of Massachusetts, and the regiment was also permitted to carry its own Irish flag, which was donated by Mrs. Harrison Gray Otis. The flag is now part of the Hall of Flags at the Massachusetts State House.The regiment fought bravely at many battlefronts during the Civil War, including Malvern Hill and Gettysburg.  The regiment returned to Boston on June 13, 1864 and was mustered out on June 21, 1864. Excerpts from Irish Boston: A Lively Look at Boston's Colorful Irish Past.  For year round information on Boston Irish history and heritage, visit IrishHeritageTrail.comFor year round details on Irish cultural events, visit IrishBoston.org.
Posted by irishboston.blogspot.com at 11:18 AM No comments:

The first Boston Marathon was held on April 19,1897, inspired by the first modern Olympic Games held the previous year in Athens, Greece.

The race was sponsored by the Boston Athletic Association, and the initial field consisted of fifteen runners, of which ten finished the race. John J. McDermott of the Pastime Athletic Club of New York won the race, finishing in two hours, fifty-five minutes and ten seconds.

Thomas E. Burke, who won first place in the 100 and 440 yard races at the Athens Olympics in 1896, was the official starter of the race.

The race started in Ashland and finished at Irvington Oval near Copley Square in Boston, which had a 220 yard track.  There BAA officials had organized an entire track and field meet in the spirit of the Olympic Games the previous year.
Among the most talked about races was the 100 yard dash, which had a stellar field that included Tom Burke of Boston University, J.S. Quinn  and W.J. Holland from Boston College, Frank Quinlan from Fordham University, and D.C. Byers of Yale.  Holland won the race, and his BC teammate Quinn took second.
McDermott apparently lost nine pounds running the race, and afterwards said, "This will probably be my last long race...look at my feet," wrote The Boston Globe in its April 20, 1897 story.  McDermott returned to Boston in 1898 and finished fourth.
For more on Boston's Irish history and heritage, visit IrishHeritageTrail.com.
Posted by irishboston.blogspot.com at 12:53 PM No comments: 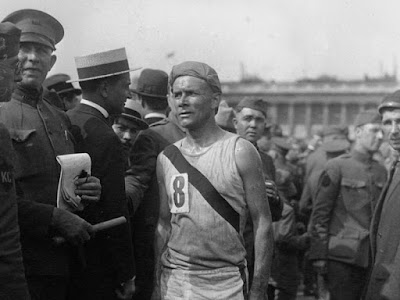 Bricklayer Bill: The Untold Story of the Workingman's Boston Marathon


The Boston Marathon is filled with iconic characters like John J. McDermott, who won the first contest in 1897, and Johnny Kelley, who finished the race 58 times.

Equally notable is "Bricklayer Bill" Kennedy, a working class Irish-American who was part of the amateur running caste in America before the sport turned professional.

Co-authors Patrick and Lawrence Kennedy have written Bricklayer Bill: The Untold Story of the Workingman's Boston Marathon.  It's an engaging, dramatic story about their famous ancestor,  with a Foreword by running legend Bill Rogers.

Bricklayer Bill won the 1917 Marathon, two weeks after the U.S. entered World War I. Boston Harbor was on full alert for German submarines lurking off shore.  Despite calls to cancel the race, Kennedy insisted on running, sporting a bright stars and stripes bandana on his head. He won the race and became an instant hero, his picture splashed across newspapers around the world.

The authors write that Kennedy "tapped into the zeitgeist not only of that moment in but also of that place – a proud but nerve-wracked city that needed a win on a grand stage."

The book is available from the University of Massachusetts Press.


Posted by irishboston.blogspot.com at 3:50 PM No comments: 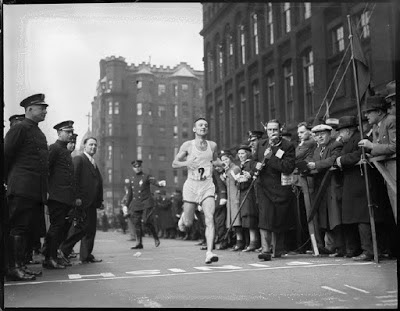 For the 123rd annual Boston Marathon taking place on Monday, April 15, 2019, we pay tribute to the legendary marathon runner John Adelbert  Kelley, who holds the record for running more Boston Marathons than any other athlete.

In 1993 the Boston Athletic Association erected a statue honoring Johnny Kelley on Heartbreak Hill in Newton.  The twin statues depict Kelley in 1935 and again in 1995, holding hands as they cross the proverbial finish line.

For more on Boston Irish history and heritage, visit IrishHeritageTrail.com or visit IrishMassachusetts.com.