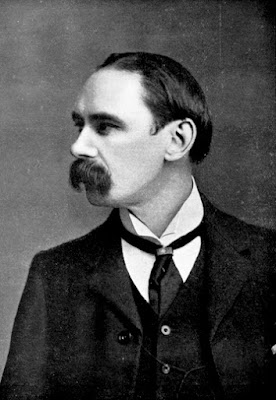 Dr. Douglas Hyde, President of the Gaelic League of Ireland and later the first President of Ireland, spoke at the Boston Theatre on Sunday, December 3, 1905. It was part of a seven month literary tour across the that had been organized by New York Irish-American John Quinn.  Hyde appeared in on three occasions as part of this tour, before heading off to Chicago and the Mid-West and finally to the West Coast.

Upon his arrival in on December 2, Hyde talked about the Gaelic Revival Movement in and the purpose of his trip, according to a report in The Boston Globe.

“My visit to is to gain the moral sympathy and support of the Irish as well as the American people,” he said.  “Let the Irish people in America read Irish history, use the Irish language, even if it were only at the table; pay occasional visits to any school of the Gaelic language schools that have free classes, free textbooks and free tuition…By doing so we will greatly add to the success of the movement.” 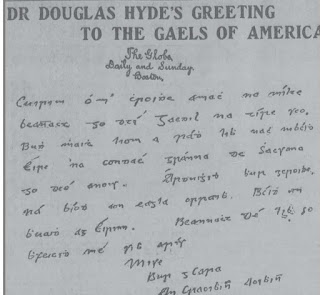 At the Boston Theatre event, Fred Norris Robinson, Chair of CelticLanguages at Harvard University, presided as the moderator and introduced Dr. Hyde.  Admission was fifty cents, with reserved seats going for seventy-five cents and one dollar.  All proceeds went to the Gaelic Fund.

Hyde’s speech at the Theatre put the Irish language issue into a context having to do with politics, history and national self-identity.

“I am here to explain to you the life and death struggle upon which we are engaged. I see it said here by the more sympathetic of the papers that is engaged upon the last grand battle of the race for the preservation of its language.  O, gentlemen, gentlemen, it is more than that, ten times, one hundred times more than that. It is the last possible life and death struggle of the Irish race to preserve not their own language but their national identity.”

, Hyde said, “has lost all that they had - language, traditions, music, genius, and ideas.  Just when we should be starting to build up anew the Irish race to take its place among the nations of the world – we find ourselves as despoiled of the bricks of nationality.  The old bricks that lasted 1800 years are destroyed; we must now set to bake new ones.”

Part of the solution, Hyde believed, was to end British rule in Ireland. “To say that has not prospered under English rule is simply a truism; all the world admits it, does not deny it. But the English retort is ready.  You have not prospered, they say, because you would not settle down contentedly, like the Scotch, and form part of the empire.” Despite this argument, Hyde continued, “We have now a great mass of public opinion in behind us….In one word, we mean to deanglicize .”

One of the sponsors of the visit was the Philo-Celtic Society of Boston, considered at that time to be the oldest Gaelic school in the world.  The Society was formed in 1873 by Irish speakers living in and held free Irish language classes every Saturday afternoon in and Roxbury Crossing.

Read more about Dr. Hyde's visits to America in an essay by Ireland's Ambassador to the United States Daniel Mulhall.

For a biography, read Douglas Hyde: A Maker of Modern Ireland by Janet Egleson Dunleavy and Gareth W. Dunleavy.

Posted by irishboston.blogspot.com at 2:45 PM No comments: