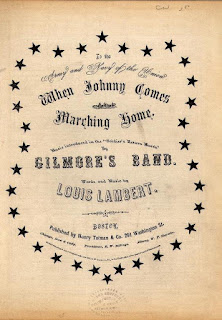 The classic war anthem, When Johnny Comes Marching Home, was first performed at Tremont Temple in Boston on Saturday, September 26, 1863 by Patrick S. Gilmore and his Orchestra.  The concert was announced in the Boston Daily Evening Transcript as described as a sacred concert.

Gilmore originally published the song - also known as the Soldiers Return March - under the pseudonym Louis Lambert for reasons unknown, but later acknowledged that he authored the piece.  The song appeared during the height of the American Civil War, and was meant as an optimistic tribute "dedicated to the Army and Navy of the Union."

Henry Tolman & Company of Boston was the publisher.

The late Gilmore expert Michael Cummings surmised that Gilmore took the song for an earlier Irish marching song called Johnie I Hardly Knew Ye, which was apparently sung by Irish regiments fighting for the British in Ceylon in the early 19th century.

It has remained popular ever since and has been recorded by hundreds of musicians, ranging from jazz organist Jimmy Smith to Boston's own Dropkick Murphys.

Posted by irishboston.blogspot.com at 8:14 AM No comments:

Here are the Mayors of Boston Claiming Irish Heritage:

From 1930 to 1993, the Boston Mayor's office was held continuously by a Bostonian of Irish descent. Martin J. Walsh began his term of office in January 2014. 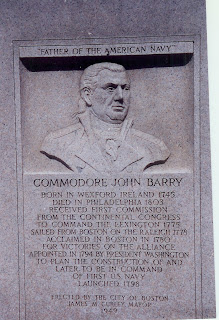 
Barry (March 25, 1745 – September 13, 1803) was born in  Tacumshane, County Wexford in 1745, and emigrated to Philadelphia in 1760.  He joined the American forces at the outbreak of the war, and was the first Catholic appointed to command a vessel by the Continental Congress.  Barry's ship, Lexington, was the first to capture a British vessel under the American flag.  During much of the war, Barry commanded ships out of Boston Harbor, including the Delaware and the Alliance. After the war, President George Washington assigned Barry to help create the United States Navy.
For many years, Bostonians commemorated the anniversary Barry's death (September 13) on Boston Common dating back to 1919.  For a time in the 1940s the celebrants also journeyed into Boston Harbor. Dan Horgan of the Irish World wrote:


"There is something sentimental, almost romantic about this gesture, it's a scene almost anyone can picture in his mind.  Distinguished citizens of the Commonwealth getting up early in the morning going out in a small boat, getting four or five miles out of Boston harbor, posing a wreath in mid-air for a few minutes before casting it into the broad Atlantic Ocean.”

At the Charitable Irish Society annual dinner on March 17, 1949, Boston Mayor James Michael Curley vowed to build a memorial to Barry in 60 days, saying Barry had been ignored for too long.  The project got underway, and the bronze memorial was actually unveiled seven months later, on October 16, 1949.

Then on April 5, 1975, some local college students stole the bronze plaque as a prank. Contrition set in a few years later and the plaque was anonymously returned to the Massachusetts Ancient Order of Hibernians.  The original was put in storage at the L Street Bathhouse in South Boston.  On Saturday, September 12, 1981, the Barry memorial was transferred from the Boston Arts Commission to the National Parks Service for permanent display at the Charlestown Navy Yard, where it remains today.

In September 1956 the USS Destroyer John Barry, built in Bath, ME, was commissioned to the Boston fleet at the Charlestown Navy Yard.


President John F. Kennedy was a great admirer of Commodore Barry.  He owned John Barry's sword and displayed it in office at the White House.  In addition to sharing a love of the sea and sailing, both men traced their lineage to County Wexford.   When he visited Ireland in June 1963, President Kennedy placed a wreath at the John Barry Memorial in Wexford.

After the Revolutionary War, Barry settled in Philadelphia.  He died at age 59 and is buried at St. Mary's Churchyard on S. Fourth Street.

To find out more about Boston Irish history, visit IrishHeritageTrail.com or read Irish Boston, available on October 1, 2013 from Globe Pequot Press and from Amazon, Barnes & Noble and other outlets.

Posted by irishboston.blogspot.com at 10:31 AM 2 comments: 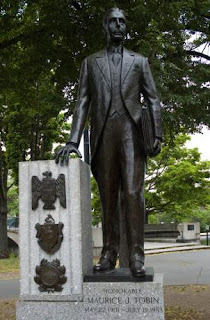 This Labor Day, the Boston Irish Tourism Association pays tribute to Boston native Maurice Tobin (1901-53).  Born in Roxbury's Mission Hill,  he was the son of immigrants from Clogheen, Tipperary.  He had an illustrious political career, which culminated in his serving as US Secretary of Labor under President Harry S. Truman.

He helped campaign for President Truman, who appointed Tobin as US Secretary of Labor from 1948 to
1953, where he continued to advocate on behalf of America's working people.

Sculptor Emilius R. Ciampa created the Tobin Memorial Sculptor in 1958, which is at the Boston Esplanade, next to the Hatchshell.  In 1967 Massachusetts named the Mystic River Bridge the Maurice J. Tobin Memorial bridge in his honor.

For more about Boston's colorful Irish history, read  Irish Boston, available from Globe Pequot Press and from Amazon, Barnes & Noble and other outlets.

Posted by irishboston.blogspot.com at 11:26 AM No comments: