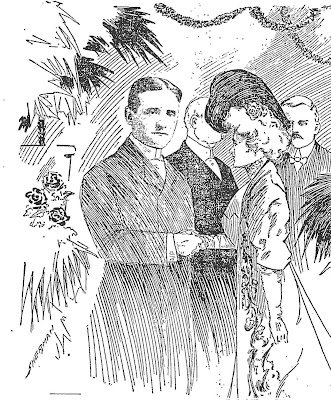 The Boston Globe wrote on January 2, “When the mayor announced the he would hold a reception among the lines of those held in the national capitol and other cities of the union, few regarded it seriously.  It had never been attempted before, and of course, to be attempted now in sedate old was regarded as nothing short of a desperate plunge with no reward in sight to warrant it."

Between the hours of noon and 2:00 p.m., over 4500 people attended, and it was deemed a success, noted the report.

Among the Bostonians who turned out to greet Mayor Ftizgerald: President Toland of the Charitable Irish Society, Herbert Carruth, deputy commissioner of the Penal Institution, Colonel Roger F. Scannell, “late defeated candidate of the Board of Alderman,” Henri Flammond, the French consul, Jeremiah McCarthy, surveyor of the port, and Patrick F. McDonald, superintendent of bridges.

Not everyone made it on time, reported The Globe.  “For an hour or more after the mayor had retired from the chamber, as many as 500 persons, women in the main, hurried to the corridor on the seond floor, only to learn that they were too late.”

Mayor Fitzgerald "said that he was highly pleased with the reception for a beginning."

Fitzgerald was the third Boston mayor of Irish heritage, following Hugh O'Brien and Patrick Collins. Here is a full list of Boston mayors with Irish ancestry.

Find out more by visiting IrishHeritageTrail.com.

Posted by irishboston.blogspot.com at 12:12 PM No comments: