Irish Art Adorns the Boston Arts Festival in the Public Garden on June 6, 1954 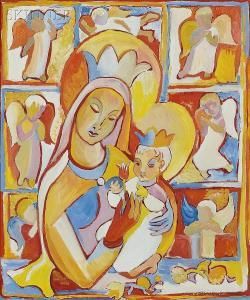 The third annual Boston Arts Festival, which opened in the Public Garden in downtown Boston on June  6, 1954, featured a tent devoted to "works by contemporary Irish artists" chosen by Ireland's Cultural Relations Department.

The Irish tent contained "24 paintings and a tapestry by some of Ireland's top-notch contemporary artists.  Some work is in the abstract vein, some semi-abstract, and more romantic."

The Boston Globe story by Edgar J. Driscoll, Jr. called the festival "the largest and most comprehensive display of the arts in the city's history."   The festival was comprised of twelve tents, "housing hundreds of thousands of dollars worth of art," Driscoll wrote.

The Ireland tent included works by "a painting priest, Rev. Jack P. Hanlon, who is represented by a Madonna and Child and a landscape inspired in County Kerry.  Others whose work has been sent here through the courtesy of the government of Ireland include William J. Leech, Daniel O'Neill, Norah McGuiness, Gerald Dillon, George Campbell, Nano Reid and Patrick Collins."

The role of the Ireland's Cultural Relations Department in bringing art and culture to Boston was part of a new initiative the Irish government undertook in the wake of Ireland becoming an independent Republic on April 18, 1949, ushering in a new era of Irish pride.

As Sean MacBride, Ireland's minister of external affairs, told a gathering of Eire Society members in 1950, "Whether it be in the field of international politics, foreign trade, or tourism, one of the first tasks to be achieved is to make the people of other countries interested in our island and to make them feel kindly to us."

Cultural exports - including art, literature and theater, and later music and dance - proved a sure way to achieve this.  In 1950 the Cultural Relations Department sent an Irish photo exhibit to  Boston as part of Jordan Marsh's hundredth anniversary.  The following year an exhibit  of paintings by Jack Yeats opened at the Institute of Contemporary Art on Newbury Street.

Throughout the 1950s various Irish performers came to Boston, including the Dublin Players in 1951 and actress Siobhan McKenna in 1957.

(Information in this blog taken from Chapter 11 of Irish Boston: A Lively Look at Boston's Colorful Irish Past by Michael Quinlin, published by Rowman & Littlefield.)

Posted by irishboston.blogspot.com at 7:09 PM No comments: