May 19, 1832: Request to Bury Irish Children in Charlestown, Massachusetts Refused by Town Selectman 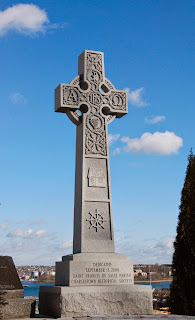 "On May 19, 1832, Boston's Catholic Bishop, Benedict Fenwick attempted to bury two Boston children, three-year-old Florence Driscoll, who died from teething, and three-month-old James Kinsley, who died from infantile disease, at the recently opened Bunker Hill Catholic Cemetery in the town of Charlestown, Massachusetts, right across the bridge from Boston.

"The obligation to make the request in writing was unusual, but the town selectman had passed a ruling the previous November, in an effort to keep Irish Catholics from being buried in Charlestown. The townsfolk feared that the Irish would bring religious superstitions and disease to their town. In the nineteenth century the entire world was worried about the spread of diseases.

"Fenwick’s request to bury the children was denied the same day it was written by Selectman Nathan Austin, who stated, “The object of the town in adopting the rule was to prevent the bringing of the dead from the surrounding towns and country. . . . We feel constrained from a sense of duty to decline giving the permission you request.”

"Bishop Fenwick decided he would test the validity of the state ruling and went ahead and buried the children without the town’s permission. The matter went to a higher court, and ultimately the church was recognized as having the right to bury its dead on its own property."

- Except from Irish Boston, 2nd edition, scheduled for publication October 2013.

Posted by irishboston.blogspot.com at 2:51 PM No comments: