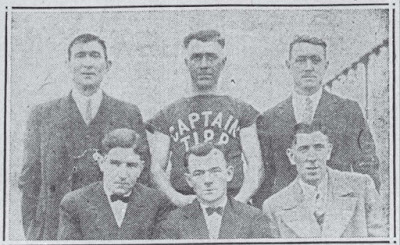 The Gaelic Athletic Association's Boston chapter held its 3rd annual ball and concert at Hibernian Hall in Roxbury on October 26, 1926.  Players on the hurling and football clubs were present.

Two orchestras provided the music for both “modern and Gaelic dancing,” and an American-Irish vaudeville show was presented at intermission, according to The Boston Globe.

Posted by irishboston.blogspot.com at 5:55 PM No comments: 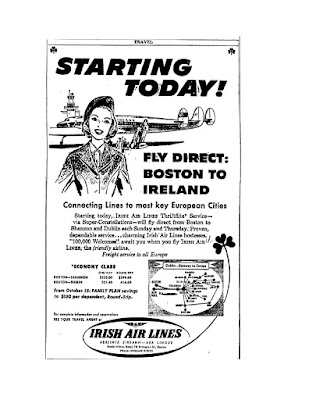 Sixty years ago this month, Ireland's airlines, Aer Lingus, launched its Boston to Shannon air service on Sunday, October 5, 1958, ushering in a new era of travel between New England and Ireland.

A 2003 story in the Boston Business Journal by Michael Quinlin reports the following:


"Aer Lingus' entry into the Boston market carried a symbolic significance. TWA and Pan Am were already flying the Boston-Ireland route, but the arrival of Ireland's national airlines captured the imagination of the city's large Irish-American population, which accounted for nearly a third of all residents. Most had never been to Ireland, and Aer Lingus, with its distinctive green shamrock logo on every plane, inspired them to make the journey, which took about 12 hours, twice as long as today's flights.

"Four days after leaving Boston, St. Brendan (the airplane, not the monk) returned in tow with Irish dignitaries such as Dublin mayor Robert Briscoe and Sean Lemass, Ireland's commerce minister. The Irish got a chance to observe local tourist campaigns, which touted autumn leaves, seaside towns and historical sites.

"Lemass saw the potential bonanza of tapping into a vast Irish-American diaspora and developing a tourism infrastructure like New England's. He promised the Irish government that if it could provide "well-equipped hotels, properly developed holiday resorts, well-built tourist roads and easily accessible shrines of historic and religious significance, (tourism) would continue to grow.""

Ireland's tourism industry did continue to grow, and set new records for American visitors in recent years.   Ireland's Minister for Tourism Paschal Donohoe was in Boston in September and told audiences that, "In 2013, alone, one million US visitors spent $1 billion in the Irish economy.  This demonstrates the importance of further developing Irish market share of the US tourism market, which is a central policy agenda of the government."

For more information about traveling to Ireland, visit Ireland.com.

For more about the Irish community in Massachusetts, visit IrishMassachusetts.com.
Posted by irishboston.blogspot.com at 1:12 PM No comments: 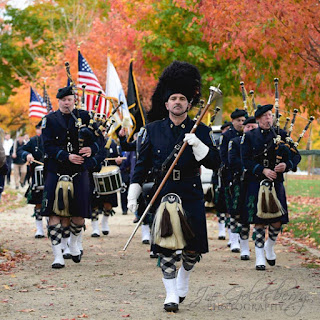 The New England Council’s Annual Dinner is taking place on Thursday, October 11 at the Seaport Boston Hotel.  President & CEO James Brett will present “New Englander of the Year” awards to four prestigious recipients for their commitment and contributions in their fields of work, as well as their leadership and impact on the region’s quality of life and economy.

In addition, the popular Boston Police Gaelic Column of Pipes & Drums will perform.

Posted by irishboston.blogspot.com at 12:07 PM No comments: 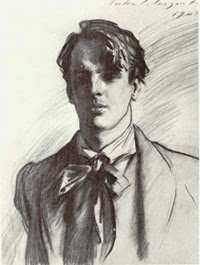 Irish poet William Butler Yeats was feted at a luncheon in  on October 6, 1911 by local literary and Irish leaders.  The luncheon hosted by the John Boyle O’Reilly Club and covered by The Boston Globe.

This was part of an American tour in fall 2011 to promote the Abbey Theatre, Ireland’s new national theatre.  The  visit included presentations of J.M. Synge’s plays, including the controversial Playboy of the Western World.

During Yeats’ remarks, he paid special tribute to O’Reilly, saying in part:

“I never met Boyle O’Reilly, but, as far as I can remember, the first poem of mine that was ever paid for appeared in the Boston Pilot under is editorship.  I don’t remember how I came to send my poems to him, but rumor used to come back to  of his romantic and gallant personality and we all knew of his adventurous life.  Probably it was old John O’Leary, the Fenian, who got me to send them, for he had told me much of O’Reilly.”

Regarding ’s cultural and political movements, Yeats said “the present intellectual movement in  came immediately after the death of Parnell. When Parnell died there came political discouragement.  For nine years the disputes of the Irish part took the romance from public life.  Everything became individual.  There were no longer any generals; everybody had to do the best he could.”

Yeats said that now, “we are beginning to see the true lineaments of the national character again.  How harsh it can be, how gracious it can be.  The spirit of Goldsmith, the spirit of Swift has come back to us.”

Here is information about the W.B. Yeats collection at John J. Burns Library at .

In 1988, the W.B. Yeats Foundation was formed by Professor James Flannery at in .


Posted by irishboston.blogspot.com at 7:05 PM No comments: