The popular Saturday Local Artists Market (SLAM) is taking place at the Burren Pub in Davis Square, Somerville, MA, on Saturday, March 27, 2010, from noon to 4:00 p.m.

The bi-monthly event started in January of this year and features up to 20 local artists and craftspeople showcasing and displaying their works, including painting, photography, jewelry, textiles, glass, ceramics, food and more.

The Burren is regarded as one of the best places in the USA to hear live traditional Irish music, seven days a week.  The pub also serves lunch and dinner.

South Boston's popular Irish band, Hogan's Goat, is performing on Saturday, March 20, from 7:00 to 10:00 p.m. at the Tamo Bar in Seaport Boston Hotel as part of the city's Irish celebration.

The band plays a lively set of Irish songs and dance melodies as well as a great array of rock, blues and popular tunes.  The performance is free and open to the public.

In addition to the live music, Chef Rachel Klein is offering a traditional Irish boiled dinner and Shephard's Pie as well as a menu of gourmet pizze and appetizers, and a full dinner menu at Aura Restaurant in the hotel.

For more information on Irish activies in greater Boston, visit IrishBoston.
Posted by irishboston.blogspot.com at 11:09 AM No comments:

Ireland's Oscar-Nominated film, The Secret of Kells, Opens in Cambridge on Friday, March 19

Ireland's hit animation film, The Secret of Kells, opens in the Boston area this Friday, March 19, at the Landmark Kendall Square Cinema in Cambridge.

The Boston Irish Tourism Association (BITA) is raffling off a free pair of tickets to attend the show on Friday night, and a special after-the-show discussion with the film's director Tomm Moore.

Winners are also invited to attend the special reception after the screening on the 19th, hosted by the Boston Irish Film Festival.

Nominated in the animated film category at this year's Academy Awards ceremonies in Los Angeles, The Secret of Kells includes voices of film stars Brendan Gleeson, Evan McGuire, Mick Lally and others. Screen Daily calls the film, "visually ravishing, and doused in Celtic magic!" The film plays at the Landmark Kendall Square through March 25, and director Tomm Moore will also be making a special appearance at the 1pm show Saturday.
To enter the contest, click here. 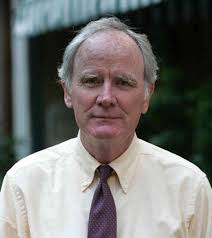 Carroll’s most recent book is Practicing Catholic, a deeply personal meditation on his own life as a Catholic, and his early heroes who ranged from John F. Kennedy and Pope Pius XXIII to Thomas Merton and Martin Luther King, Jr.

A long-time contributor to The Boston Globe and many national publications, Carroll has written three novels and six works on non-fiction.

The Charitable Irish Society was formed in Boston in 1737 by Irish merchants who banded together to help their fellow countrymen in the early days of the Bay Colony. It is the oldest Irish organization outside of Ireland.

There is no cover charge and dinner reservations are recommended.

For more details on Irish music in greater Boston year round, visit IrishBoston.

For more details on jazz in Massachusetts year round, visit MassJazz
Posted by irishboston.blogspot.com at 6:49 PM No comments:

As part of the St. Patrick's Day round-up of parades, concerts, cultural events and the heritage and history of the Irish in Massachusetts, Boston.com has created a video tour of Boston's Irish Heritage Trail.
Click here to see the video, which is produced by Michael Saunders and features reporter Courtney Holland visiting the Boston Omni Parker House, the Black Rose Pub, and various stops along the Trail, including the Boston Irish Famine Memorial, Old Granary Burying Ground, and statues of Kevin White and James Michael Curley.
The Irish Heritage Trail was created by the Boston Irish Tourism Association to explore the city's Irish presence dating back to the 18th century.
Posted by irishboston.blogspot.com at 3:08 PM No comments:

On Saturday, March 13, the John F. Kennedy Presidential Library & Museum presents a children’s show entitled Themselves - - An Immigrant's Story.
The show follows a young nineteenth-century Irish woman on a journey to , as she struggle to begin a new life while keeping her Irish heritage alive.
The interactive performance, which is free to the public, features storytelling, traditional music, and an Irish jig!
John F. Kennedy Presidential Library & Museum
Columbia Point,
10:30 am | Free Performances For Children Ages 5 and Up
617 514-1644 - - Reservations required | jfklibrary.org
To read more about the Kennedy family in Massachusetts, visit IrishMassachusetts.
Posted by irishboston.blogspot.com at 7:08 PM No comments:

Boston's Berklee College of Music is returning to Dublin, Ireland, April 5-11, to conduct improvisation workshops and to hold auditions for aspiring student musicians seeking scholarships to the prestigious university.
The program, now in its second year, is taking place at the Newpark Music Centre in Blackrock, Co. Dublin. Students must apply online for the workshop by March 19.

For year round jazz in Massachusetts, visit MassJazz.
Posted by irishboston.blogspot.com at 10:34 PM No comments:

Click here to book your trip to Ireland / Europe

In celebration of St. Patrick's Day, take advantage of super airline deals from Boston to Shannon or Dublin for as low as $349 each way, plus other great European destinations this summer.
And check out great holiday packages to Ireland, including airfare, motorcoach, meals and sightseeing included!
For more details visit Aer Lingus.
Posted by irishboston.blogspot.com at 12:38 PM No comments: 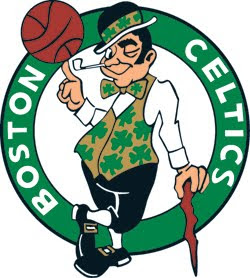 Many people wonder why the Boston Celtics basketball team sports shamrocks on the players' green uniforms, and why the team logo features an Irish leprechaun.

According to the team’s official history, the name Celtics was chosen in 1946 when owner Walter Brown sat down with his public relations guy, Howie McHugh, to figure out what to name the new team.

Some of the ideas included the Whirlwinds, Unicorns and Olympics.

Then Brown had an epiphany, saying, “Wait, I’ve got it – the Celtics. The name has a great basketball tradition from the old Original Celtics in New York (1920s). And Boston is full of Irishman. We’ll put them in green uniforms and call them the Boston Celtics.”

In 1950 Brown hired Red Auerbach to coach the team, and the rest is history.

Auerbach commissioned his brother Zang, a graphic designer in the newspaper business, to come up with a logo to suit the name.

Zang’s artwork incorporated all of the iconic depictions of the Irish in America that were prevalent in the 1950s: a leprechaun with shamrocks on his vest and a bowler hat, smoking a pipe, holding a shillelagh and sporting a mischievous grin!

The logo is said to have brought the Celtics good luck, since they won their first championship in 1957, so it has remained ever since. Seventeen world championships later, the logo at center court is one of Boston’s most cherished icons and a symbol of a great sports franchise.

This St. Patrick's Day, March 17, the Boston Celtics play host to the New York Knicks at the Garden.


© Boston Irish Tourism Association
Posted by irishboston.blogspot.com at 10:37 AM No comments:

Irish Immigrant Patrick Carr one of the five victims of the Boston Massacre, March 5, 1770

"Captain Thomas Preston of the 29th British regiment ordered his men to present arms to keep the crowd at bay, but the taunting continued...The troops fired into the crowd.

"Thirty-one year old Patrick Carr, an Irish immigrant who had come out of a house on Court Street and was moving toward the ruckus with fellow sailor Charles Connor, was the last man to be shot.  The British soldiers escaped back to their barracks and the crowd dispersed to a local tavern in absolute shock and anger about the turn of affairs.  Captain Preston was arrested and jailed at three o'clock on Tuesday morning.

"As the trial of Preston and his men loomed, an Irish dimension emerged.  Local newspapers like the Boston Gazette suggested that many of the soldiers the British sent to Boston were Irish Catholics...The Providence Gazette suggested that Pope's Day should take place on the anniversary of the Boston Massacre so as to include Preston and the others in the effigy burning."

Excerpts from Irish Boston: A Lively Look at Boston's Colorful Irish Past by Michael P. Quinlin, published by Globe Pequot Press (2004).
Posted by irishboston.blogspot.com at 12:38 PM No comments:

The Boston Irish Heritage Trail was created in 1994 by Michael and Colette Quinlin as a way for visitors and residents alike to appreciate Boston history as seen through Irish eyes.  It was first published in the book, Guide to the New England Irish.

In 2000 the Trail project went online with the launch of IrishHeritageTrail.com/boston/, a collection of twenty sites, starting at the Rose Kennedy Garden at Boston's waterfront and ending up at Fenway Park, which was built by Irish immigrant Charles Logue in 1912.  The Trail includes colonial landmarks like the 18th century Old Granary Burial Ground as well as recent sites like the Irish Famine Memorial park, unveiled in 1998.

The online Irish Heritage Trail is maintained by the Boston Irish Tourism Association.

There is also a Boston neighorhood section with twenty additional landmarks in neighborhoods like South Boston, Charlestown and Jamaica Plain, as well as surrouding cities and towns like Brookline and Cambridge.

And plans are underway to create a statewide version that includes Irish memorials, burial groups and other public landmarks across the state.

Visitors can pick up a free copy of the Boston Irish Heritage Trail map at visitor centers on Boston Common and at the Prudential Center, which is operated by the Greater Boston Convention and Visitors Bureau.

You can order a copy of the Irish Heritage Trail by mail, with includes two copies of the map along with educational materials on Boston Irish history, by clicking here.
Posted by irishboston.blogspot.com at 5:33 PM No comments:

South Boston Parade, 1980s Photo
The 109th annual St. Patrick's Day/Evacuation Day parade takes place in South Boston on Sunday, March 14, 2010, at 1:00 p.m., starting at the beginning of West Broadway.  Organizers expect over 100 units marching in this year's parade.
For a copy of the parade route, click here.
For a complete list of parades in Massachusetts in March 2010, click here.
Posted by irishboston.blogspot.com at 8:52 PM No comments: