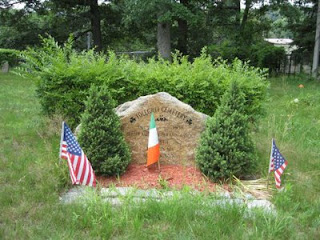 The Boston chapter of the Ancient Order of Hibernians is paying tribute to the fallen Civil War soldiers from Massachusetts' Irish regiments with a ceremony at Toll Gate Cemetery in Jamaica Plain, Boston, on Saturday, September 1, 2012 at 11:00 a.m.

The event is free and open to the public. Monsignor Francis X. Kelly of nearby Sacred Heart Church will lead the ceremony in prayer.

Organizer Kevin Durant says the AOH group, along with the local Boy Scouts, have been cleaning the cemetery grounds throughout the summer.  Durant says many soldiers from the Massachusetts 28th Voluntary Infantry, composed entirely of Irish and Irish-American soldiers, are buried in the cemetery.

You can find more information on Boston's Irish heritage and history at IrishHeritageTrail.com.

Posted by irishboston.blogspot.com at 1:27 PM No comments: