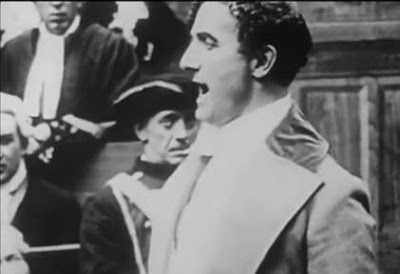 Ireland a Nation, described in The Boston Globe as  "The stirring story of Ireland's fight for freedom as a Nation since 1800" and told "in graphic motion pictures from the Old Land," made its debut at Boston's National Theatre on October 19, 1914.


The black & white, silent film came in five reels, and starred Irish actor Barry O'Brien as Robert Emmet, along with other Irish actors and actresses of the day.  The film was written, directed and produced by WalterMacNamara, and issued in the on September 22, 1914.

Here is a full synopsis of Ireland a Nation on Trinity College's Irish Film and TV Research Online project.

"Large audiences, in which were included many prominent Irish-Americans of the city, enthusiastically greeted the pictures," the  Globe wrote.  Prior to the filming, the Emerald Quartet provided live music, and "moving pictures of Cardinal O'Connell, Governor (David I.) Walsh and Mayor (James Michael) Curley were then presented."

The British Government banned the film in because of it’s nationalistic sentiments.  It was finally released in Ireland on January 8, 1917.

The National Theatre of Boston was located at 533 Tremont Street in Boston's South End, just next to where Boston Center for the Arts is today.

Posted by irishboston.blogspot.com at 12:57 PM No comments: 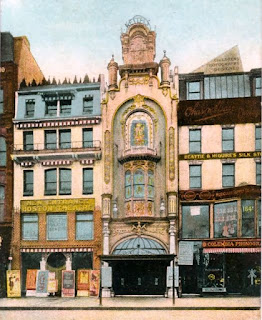 The week of October 12, 1914 Chicago-born uilleann piper Charles Mack played at B.F. Keith’s Vaudeville Theatre in with his musical revue, “Come Back to ”  He was joined by his co-star and wife Etta Bastedo, who was from .

Reviewing the show, The Boston Globe wrote that Etta “won favor in Celtic songs,” while Charles “contributed pleasing selections on a kind of bagpipe.”

In an earlier 1912 review, the Globe said that Mack and company “give a fresh and wholesome sketch that combines pathos and Celtic humor most appealingly.”

Mack was the son of Michael Charles McNurney, who emigrated from to in 1850.  McNurney and Sargeant James Early were pupils of uilleann piper James Quinn in .  Musicologist Francis O’Neill, in his book Irish Minstrels and Musicians, described McNurney as “a wealthy horseshoer and alderman, who was himself an enthusiastic dilettante on the pipes.”

McNurney's son Charles Mack, born around 1869, began performing as a teenager and was a star on the Albee and Keith vaudeville circuit, according to a 1957 story in the Miami Sunday News, which interviewed his son, Charles Jr, who had a successful career as a professional clown.  Mack was the stage name he and his father used throughout their careers.

When Charlie Mack the piper visited Boston in 1914, he would have been familiar with the Boston Pipers Club, formed in 1910 by local musicians Michael and William Hanafin, along with PatsyTouhey, by then the leading piper of his generation.

For more about ’s Irish history and heritage, visit IrishHeritageTrail.com or Irishboston.org.

Posted by irishboston.blogspot.com at 4:58 PM No comments:

The Boston Celtics - Green Uniforms, Shamrocks and Lucky the Leprechaun 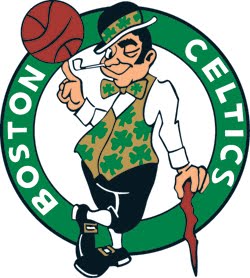 Many people wonder why the Boston Celtics wear shamrocks on their green uniforms and have a giant leprechaun smoking a pipe as their team logo. And why the team mascot is a guy named Lucky who looks like he stepped out of a box of Lucky Charms?
According to the Boston Celtic’s official web site, the name came about in 1946 when owner Walter Brown started the team. He and his public relations guy, Howie McHugh, were throwing out potential nicknames, including the Whirlwinds, Unicorns and Olympics.
It was Brown who had the epiphany, saying, “Wait, I’ve got it – the Celtics. The name has a great basketball tradition from the old Original Celtics in New York (1920s). And Boston is full of Irishman. We’ll put them in green uniforms and call them the Boston Celtics.”
Red Auerbach, the now legendary coach of the early Celtics, then commissioned his brother Zang, a graphic designer in the newspaper business, to come up with the famous Celtics logo in the early 1950s. The logo manages to include all of the iconic depictions of the Irish in America that were standard in the 1950s: a leprechaun covered in shamrock clothing and a bowler hat, smoking a pipe, holding a shillelagh and sporting a mischievous grin!
The logo is said to have brought the Celtics good luck, since they won their first championship in 1957, so it has remained.
For more information on Irish-American history and heritage visit IrishHeritageTrail.com. For current Irish cultural activities visit IrishBoston.org.

Find details on The Shamrock Foundation, a charitable organization run by the Boston Celtics.
For more about the Boston Celtics, visit NBA.com/celtics/
Posted by irishboston.blogspot.com at 9:55 AM No comments: 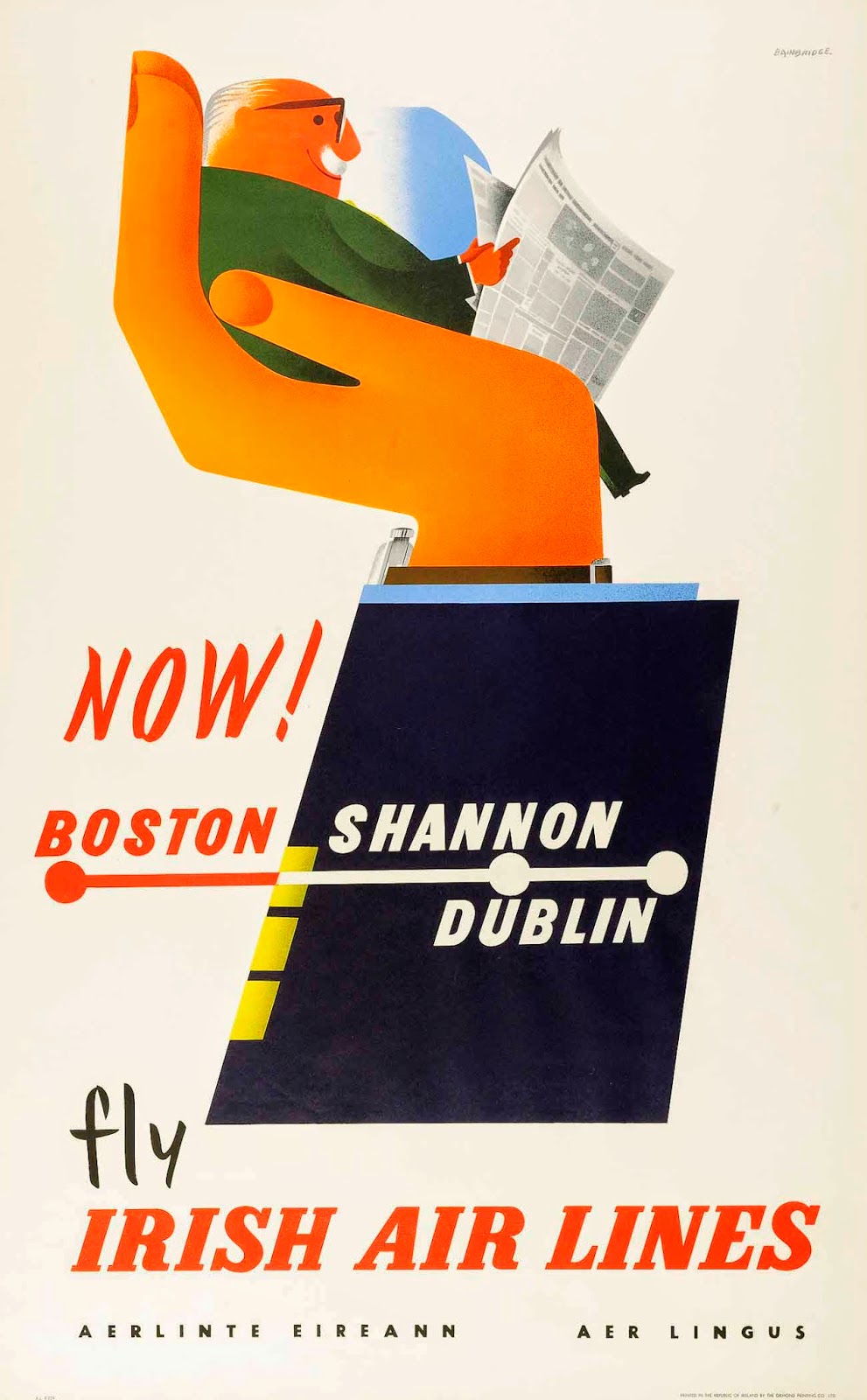 Ireland's airlines, Aer Lingus, launched its Boston to Shannon air service on Sunday, October 5, 1958, ushering in a new era of travel between New England and Ireland.

A 2003 story in the Boston Business Journal by Michael Quinlin reports the following:

"The inaugural flight that bright fall day was an Irish affair start to finish.


"Business leaders, journalists and travel agents with Irish names tagged along, prompting journalist Brendan Malin to peg Boston as "the American Dublin." Even Logan International Airport was named for Irish-American Edward J. Logan, a judge and general from South Boston whose father, Lawrence, had come from County Galway.

"Aer Lingus' entry into the Boston market carried a symbolic significance. TWA and Pan Am were already flying the Boston-Ireland route, but the arrival of Ireland's national airlines captured the imagination of the city's large Irish-American population, which accounted for nearly a third of all residents. Most had never been to Ireland, and Aer Lingus, with its distinctive green shamrock logo on every plane, inspired them to make the journey, which took about 12 hours, twice as long as today's flights.

"Four days after leaving Boston, St. Brendan (the airplane, not the monk) returned in tow with Irish dignitaries such as Dublin mayor Robert Briscoe and Sean Lemass, Ireland's commerce minister. The Irish got a chance to observe local tourist campaigns, which touted autumn leaves, seaside towns and historical sites.

"Lemass saw the potential bonanza of tapping into a vast Irish-American diaspora and developing a tourism infrastructure like New England's. He promised the Irish government that if it could provide "well-equipped hotels, properly developed holiday resorts, well-built tourist roads and easily accessible shrines of historic and religious significance, (tourism) would continue to grow.""

Ireland's tourism industry did continue to grow, and set new records for American visitors in recent years.   Ireland's Minister for Tourism Paschal Donohoe was in Boston in September and told audiences that, "In 2013, alone, one million US visitors spent $1 billion in the Irish economy.  This demonstrates the importance of further developing Irish market share of the US tourism market, which is a central policy agenda of the government."

Aer Lingus flies out of the international Terminal E at Logan Airport.   Massport, which runs the airport, installed an exhibit of iconic Massachusetts in October, 2011, which included Boston's Irish Heritage Trail.

For more information about traveling to Ireland, visit Ireland.com.

For information about visiting Massachusetts, go to MassVacation.com.

Posted by irishboston.blogspot.com at 11:42 AM No comments: 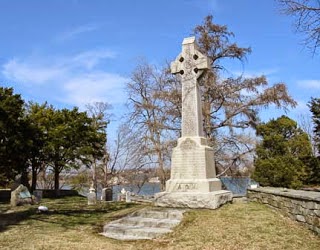 A tragedy off the coast of Massachusetts that occurred 165 years ago this month is being remembered on Sunday, October 5, 2014, by the Ancient Order of Hibernians, Plymouth Div. 9,

The event commemorates the Brig St. John, which  sank off the coast of Cohasset on October 6, 1849, while transporting 104 passengers and sixteen sailors from Galway to Boston.  The brig encountered a nor'easter that pushed the boat south, forcing it to try to anchor near Minot Light.

Sunday's event begins at 1:00 p.m. with a Mass at St. Anthony’s Church, 129 South Main Street in Cohasset.   Irish singer Máirín ÚiChéide is the soloist, and the Boston Police Gaelic Column are performing prior to the Mass and at the wreath laying ceremony

After the mass and reception in the church hall, participants will walk over to the Cohasset Central Cemetery for a brief wreath-laying ceremony at the foot of the large Celtic Cross.  The 20 foot Cross was erected in the cemetery 100 years ago this month by the Ancient Order of Hibernians Men's and Women's Auxiliary.

For year round information on cultural activities, visit IrishMassachusetts.com.

Posted by irishboston.blogspot.com at 8:06 AM No comments: