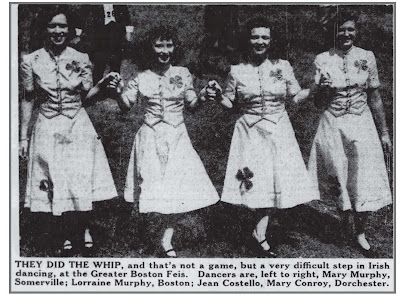 Over 15,000 spectators attend the Greater Boston Feis at Malden Municipal Stadium in on Sunday, July 30, 1950.  It was part of a cultural rekindling of Irish traditions taking place in Ireland and Diaspora communities after World War II, and continued annually in greater Boston throughout the 1950s.

The bilingual program book, printed in English and Irish, was organized by the Central Council of Irish County Clubs, Inc, with Richard J. Cardinal Cushing, Archbishop of Boston, listed as the event’s patron.

In addition, there were matches in Gaelic football and Irish hurling, set dancing and step dancing competitions, Gaelic recitations and storytelling and essay contests on the topic of “Commodore John Barry, Fatherof the American Navy.”

The content of the program book was patriotic and nationalistic. The Feis was dedicated to Dr. Douglas Hyde, co-founder of the Gaelic League and President of , “who awakened a slumbering, almost defeated people to a consciousness of the power and beauty of their language and their ancient culture.  He opened up new vistas of freedom of thought and developed fresh concepts of political freedom.”   A suggested reading list in the program included works by Irish rebels General Tom Barry and Ernie O’Malley.

The competition winners received their trophies and medals at a special ceremony at the on September 13, 1950.

In 1951, the Greater Boston Feis moved to a larger venue at Suffolk Downs Racetrack in East Boston.

Posted by irishboston.blogspot.com at 1:10 PM No comments: 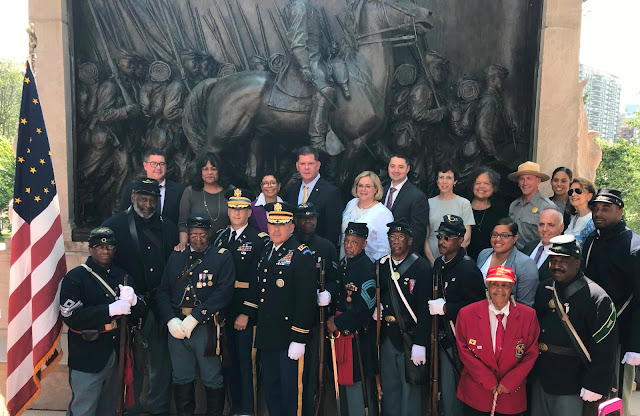 Located at the corner of Beacon and Park Streets, across from the Massachusetts State House, the memorial pays tribute to the 54th Black Regiment of soldiers who fought valiantly in the American Civil War.  This work captures the humanity, nobility and unfettered idealism of war in the depiction of the foot soldiers who fought for freedom from slavery. 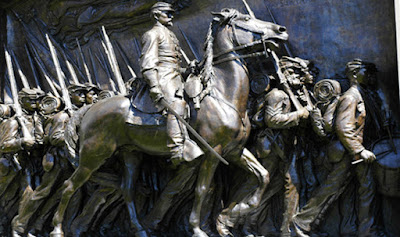 Mayor Walsh called the memorial, “one of the most important pieces of art in the  and we are deeply proud to have that piece here in the city of .  It reminds us of what is possible in our city when we live by our highest ideals.”

The sculptor was Augustus Saint Gaudens, who was born in  in 1848 to a French father and Irish mother.  At age six months, Augustus fled with his family to escape the Irish Famine and landed at in October 1848.  The family eventually moved to , and Augustus later moved to where he studied the works of master sculptors.

Considered the premier American sculptor of his generation, Saint Gaudens created the Admiral David Farragut statue in South Boston, hailed as “the beginning of the American renaissance” in sculpture; statues of Abraham Lincoln (standing and sitting) in Chicago; and General William Sherman's stunning memorial at the entrance to New York City’s Central Park. He also created the Charles Stuart Parnell Statue in his native city of .

Posted by irishboston.blogspot.com at 7:06 PM No comments: