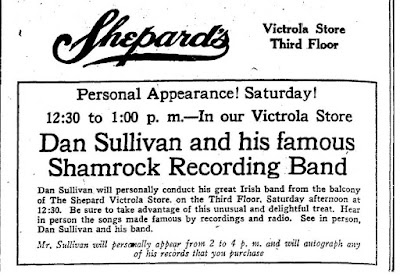 The famous Boston Irish traditional ensemble, Dan Sullivan and the Shamrock Recording Band, performed at Shepard's Department Store in downtown Boston on March 23, 1929, according to this ad in the Boston Globe.

The juxtaposition of band and the venue were significant, since Sullivan was one of the first Irish musicians to record extensively out of Boston, on Columbia, Victor and Decca labels, according to the Irish Traditional Music Archives in Dublin.

The Shepard Stores, located on Tremont Street right across from Park Street Station, actually built its own fully-equipped radio broadcasting station, WNAC, on the third floor of its building,with a 65 foot signal tower atop the roof, according to the blog site, Shopping Days in Retro Boston.

The band had a regular radio slot on WNAC, starting in 1928, usually on Monday's at 8:00 p.m.  An ad on April 9 of that year listed the band, along with special guests: Michael C. Hanafin, violinist; Thomas Quinn, tenor; and Shaun Nolan, well known as a singer of Irish songs."

Sullivan was the son of Dan Sullivan the fiddler, originally from Mill Street, Cork and Tralee, Kerry.  Famed music collector Captain Francis O'Neill visited the elder Sullivan in Boston in 1905, describing him as "a teacher and maker of violins."

(For more on Boston's Irish music history, read Irish Boston: A Lively Look at Boston's Colorful Irish Past. )
Posted by irishboston.blogspot.com at 9:00 AM No comments: