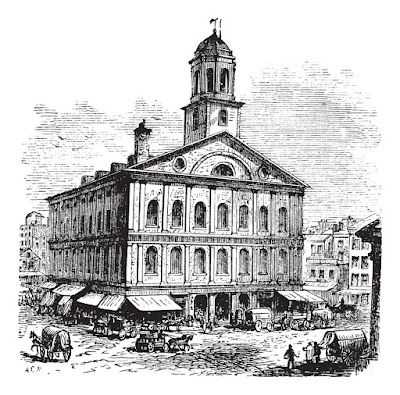 "When the full extent of Ireland's potato crop failure became known in Boston, both the Irish and the Yankee Community spring into action.  On February 7, 1847 Bishop John Fitzpatrick gave an emotionally-charged sermon from the pulpit of the Cathedral of the Holy Cross and Parish priests followed suit.  By the end of the month the Boston Archdiocese had raised $20,000 for Ireland.  Workmen were sending in $5 bills and school children were giving over their paltry savings for this urgent desperate cause.

"On February 18, 1847, 's city officials and business leaders held a meeting at Faneuil Hall to discuss the growing crisis of the famine in .  Over 4,000 people attended.

"Harvard President Edward Everett and Boston Mayor Josiah Quincy, Jr., along with the city's leading merchants, made a passionate appeal to aid the starving people of .  They formedd the New England Relief Committee, which raised more than $150,000 in three weeks to purchase supplies.

"Four days later, Robert Bennet Forbes, a wealthy China trade merchant from Milton petitioned Congress for the loan of a naval ship to bring supplies to the people of Ireland.  Permission was granted and the USS Jamestown, than anchored at the Charlestown Navy Yard,  was designated to Boston while the USS methadone Ian was given over to Captain George Takei for a similar Enterprise in New York."

Find out more about Boston's Irish history by visiting IrishHeritageTrail.com.

Posted by irishboston.blogspot.com at 10:15 AM No comments: