"The very first Opening Day at Fenway Park, April 20, 1912, had the appearance of an old-fashioned Irish field day.   Bucky O’Brien was on the pitcher’s mound. Umpire Tommy Connolly was behind home plate, and ace sports reporter Timothy Murnane was scribbling for the Boston Globe.  Mayor John “Honey Fitz” Fitzgerald, the grandfather of President John F. Kennedy, threw out the first pitch, officially kicking off the first major league game to take place at Fenway Park. ..."

Read the entire story in this week's Irish Echo.

For year round details on Irish cultural activities in Massachusetts and the New England region, visit IrishMassachusetts.com.

Posted by irishboston.blogspot.com at 9:25 AM No comments:

The first Boston Marathon was held on April 19,1897, inspired by the first modern Olympic Games held the previous year in Athens, Greece.

The race was sponsored by the Boston Athletic Association, and the initial field consisted of fifteen runners, of which ten finished the race. John J. McDermott of the Pastime Athletic Club of New York won the race, finishing in two hours, fifty-five minutes and ten seconds.

Thomas E. Burke, who won first place in the 100 and 440 yard races at the Athens Olympics in 1896, was the official starter of the race.

The race started in Ashland and finished at Irvington Oval near Copley Square in Boston, which had a 220 yard track.  There BAA officials had organized an entire track and field meet in the spirit of the Olympic Games the previous year.

Among the most talked about races was the 100 yard dash, which had a stellar field that included Tom Burke of Boston University, J.S. Quinn  and W.J. Holland from Boston College, Frank Quinlan from Fordham University, and D.C. Byers of Yale.  Holland won the race, and his BC teammate Quinn took second.

McDermott apparently lost nine pounds running the race, and afterwards said, "This will probably be my last long race...look at my feet," wrote The Boston Globe in its April 20, 1897 story.  McDermott returned to Boston in 1898 and finished fourth.

For more on Boston's Irish history and heritage, visit IrishHeritageTrail.com.
Posted by irishboston.blogspot.com at 6:38 PM No comments: 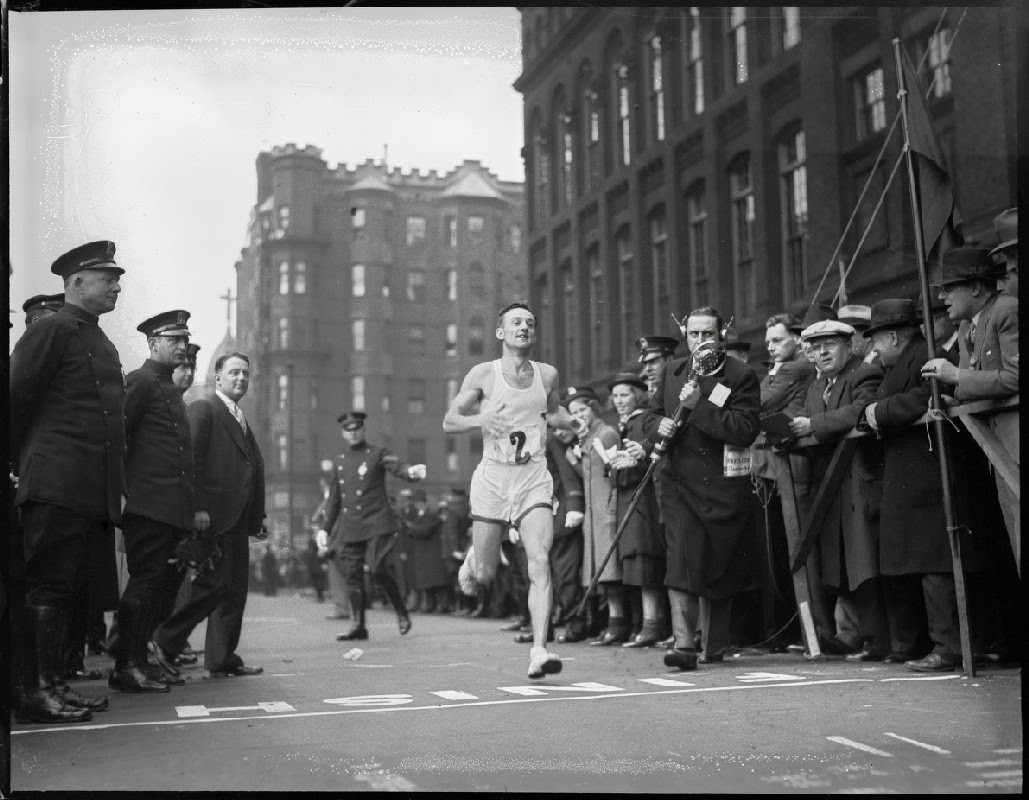 For the 116th running of the Boston Marathon taking place on Monday, April 16, 2012, our thoughts turn to John Adelbert  Kelley, who holds the record for running more Boston Marathons than any other athlete.

In 1993 the Boston Athletic Association erected a statue honoring Johnny Kelley on Heartbreak Hill in Newton.  The twin statues depict Kelley in 1935 and again in 1995, holding hands as they cross the proverbial finish line.
For more on Boston Irish history and heritage, visit IrishHeritageTrail.com or visit IrishMassachusetts.com.

Posted by irishboston.blogspot.com at 5:38 PM No comments: