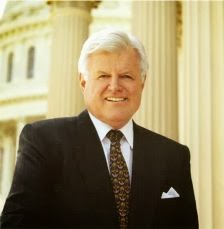 
"Senator Ted Kennedy was a champion of Irish causes for all of his career, and a formidable ally to have had on your side in the nation’s capital. Kennedy’s death of brain cancer on August 25, 2009 closed one more chapter in the Boston Irish annals, marking a changing of the guard, the official end of the Camelot era, the last of the Last Hurrahs.

"...He devoted the final three decades of his career to being the best US senator he could possibly be. He vigorously pursued the social causes that were dear to him: health care reform; civil rights for minorities, women, gays, and the disabled; protecting jobs and economic opportunity for working people; human rights around the world; and immigration reform here in America....

"'I grew up in a large Irish Catholic family as the youngest of nine children,' he once wrote.  'By their words, their actions, and their love, our parents instilled in all of us the importance of the ties that bind us together—our faith, our family, and our love of this great country.'"

On August 25, 1987, Boston Mayor Ray Flynn announced plans to open an Immigrant Rights Unit at Boston City Hall to help the city's immigrant community with health care and legal services, according to a story in the Boston Globe by reporter Andrew Blake.

"It is my belief that the right to health care is a human right," Flynn said in a statement issued that day. "For that reason, the extensive range of services available at Boston City Hospital and the City Health Department's 25 neighborhood health care centers are available to all people in need of health care....the city of Boston again must lead the way by setting an example of what a humane government must do in order to assist those who have come to our city in search of a better life."

The Immigrant Rights Unit officially opened on October 1, 1987, and served a mixture of Irish, Haitian and Central American immigrants.  It relied on one paid staffer and a network of volunteer lawyers and health service specialists.

The unit opened during a time when federal officials were starting to crack down on illegal immigrants living in the United States.

Find more about Boston's Irish heritage by visiting IrishHeritageTrail.com.
Posted by irishboston.blogspot.com at 10:33 AM No comments: 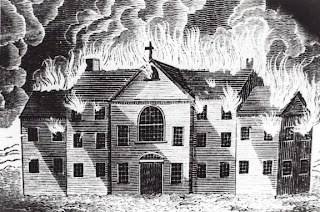 Image Courtesy of Archdiocese of Boston

"In Charlestown, the townsmen grew increasing resentful as the Catholic presence increased in the town. Bishop Fenwick had built Saint Mary’s Catholic church, opened a Catholic cemetery, and developed the twenty-four-acre Ursuline Convent, all within the space of a decade. The convent, a boarding school for girls, especially rankled the laboring class, since the young women came mainly from wealthy Catholic and Protestant families in Boston. Historian Nancy Lusignan Schultz writes that “these families paid a yearly tuition to the nuns equivalent to a bricklayer’s wages for six months’ labor.”

"The workmen, frustrated by economic woes and the growing competition from immigrants for jobs, took on a nativist mentality that put the rights of Americans above the rights of immigrants. It didn’t help that Rev. Beecher and others were preaching about a Catholic conspiracy, rekindling seventeenth-century Puritan fears of popery and Jesuit priests that had sparked anti-Catholic hysteria more than a century earlier.

"All these factors came to bear on August 11, 1834, when the Ursuline Convent was set afire by angry workmen led by John Buzzell, a New Hampshire transplant who worked as a bricklayer. The frightened nuns and their young female boarding students rushed from the school as the building went up in flames, with the bloodthirsty mob intent on burning it to the ground. A newspaper later reported that the “pianos and harps, thrown from the windows when the Convent was set on fire, were subsequently burnt, and nothing but an old chair and one or two worthless articles were saved from destruction.” 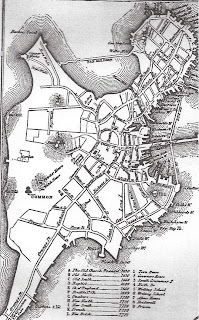 
"On August 4, 1718, five boats, containing about seven hundred Ulster Irish Presbyterians, arrived in Boston Harbor. They had been assured beforehand that they could purchase a parcel of land in the city, but when they arrived city leaders informed them they would need to join the Puritans’ Congregational Church to reside in Boston. A few of them did, but the rest refused to change religion. At Governor Samuel Shute’s suggestion, the Presbyterians moved to twelve square miles of land in Casco Bay, Maine, and eventually settled Worcester, Massachusetts, and Londonderry, New Hampshire.

"The arrival of these new settlers caused some concern. Alluding to grain shortages in the city, Thomas Lechmere complained in 1718, “These confounded Irish will eat us all up, provisions being most extravagantly dear and scarce.” The Boston Town Records in 1723 noted that “great numbers of people have lately been transported from Ireland into this Province, many of which by reason of the present Indian war and other accidents befalling them are now residents in this town. . . . If due care [is] not taken, they may become a Town Charge or be otherwise prejudicial to the well fair and prosperity of the place.”