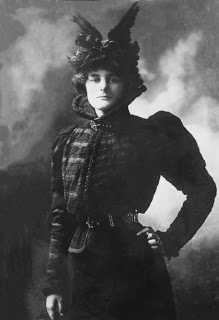 Maud Gonne, rebel, activist and poetic muse, came to the United States in February 1900, to tell Americans about the atrocities of the British in South Africa's Boer War.  She spoke forcefully about British refugee camps filled with women and children, and of efforts by Irish and Irish-Americans to fight alongside the Boers.

Gonne's husband, Major John MacBride, led the Irish Transvaal Brigade on the side of the Boers during the war.  They were married in 1903 and divorced in 1905.

Already renowned for her beauty and fiery disposition, she was described by The Boston Globe as "pictuesque in a black velvet gown with a silver girdle at the waist...her splendid voice extremely musical."
Gonne spoke in Lowell on Sunday, February 11, 1900 in Associate Hall, and later met with a group of German-Americans from Lawrence.
Then on Monday, February 12, she addressed 2,500 people in Fall River, during which eight Irish societies of 500 men and women preceded her speech with a parade that included two brass bands and a drum corps.
Gonne arrived in Boston on Sunday, February 17, and was greeted at South Station by a delegation of 50 men and women from Irish societies, who escorted her to the Vendome Hotel on Commonwealth Avenue.  The following day Gonne spoke at Tremont Temple on Boston Common, before 2,000 cheering supporters.  There she uttered a phrase that bespoke the mindset of many Irish people.
"From an Irish point of view," she said, "it matters not whether it be right or wrong, the nation that is the enemy of England is a friend and ally of Ireland."   That proposition was later rephrased by Irish rebel James Connolly as "England's difficulty is Ireland's opportunity."
Gonne left from New York on March 7 to return to Ireland, just in time to protest Queen Victoria's first and only visit to Ireland in April 1900.
Maude was the longtime muse of Irish poet William Butler Yeats, who also came to Boston on several occasions to promote Irish theater.  In his famous poem, Easter 1916, Yeats referred to MacBride, who was executed by English soldiers in the wake of the 1916 Easter Rising.
(Excerpts from Irish Boston: A Lively Look at Boston's Colorful Irish Past, published by Globe Pequot Press)
Posted by irishboston.blogspot.com at 12:22 PM No comments: 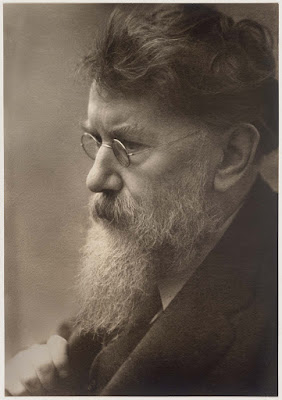 Born in Lurgan, County Armagh, Russell moved to Dublin as a child and played an important role in Ireland's evolution in the early 20th century, as a writer, activist and thinker. He wrote under the pen name AE.

Described by The Boston Globe as "the most brilliant and versatile genius (Ireland) has produced in this generation," Russell held court at Boston's Statler Hotel upon arriving, talking with reporters for half an hour and impressing them with "the flash of his wit and the power of his  intellect."

He then traveled across the river to Cambridge, where he "lectured at Harvard in the afternoon and dined with President Abbot Lawrence Lowell in the evening."

AE said that the Gaelic revival and the poets of Ireland "had a large influence in the Irish fight for freedom.  There has been no great movement in Ireland that has not had a poet at the roots of it. Padraic Pearse, Joseph Plunkett and Thomas MacDonagh, poets, were all executed for their part in the Easter Rebellion.

"In our ancient sagas nothing was prized save the essential human virtues.  The emphasis is on truth, chivalry, heroism."


Posted by irishboston.blogspot.com at 6:04 PM No comments: