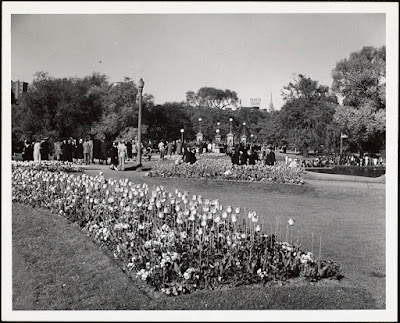 In July, 1916, the Boston Parks & Recreation Department created a floral design of an Irish harp in Boston's Public Garden to welcome the national convention of the Ancient Order of Hibernians.  The convention took place on July 19-23 and attracted over 50,000 delegates, many from the mid-Atlantic and mid-Western states.

According to a Boston Globe story on July 2, 1916, a number of local residents complained about the Irish arrangement to John H. Dillon, chairman of the Parks Department and James M. Curley, mayor of .

Dillon "explained that it has always been his policy to plant in the an emblem of any large organization holding its convention in , but up to the present instance of the harp no objection has ever been made.  He recalled that last year the emblem of the Zionists was planted in the and that at other times the Masonic emblem, as well as the insignia of a large colored organization, had been laid out in flowers there.

"He added that he did not quite see how the emblem of the AOH Could offend anyone."

Later in the month, just as the AOH convention was ending, the harp floral arrangement was vandalized in the middle of the night and wrecked, according to the Globe.


Posted by irishboston.blogspot.com at 11:45 AM No comments: