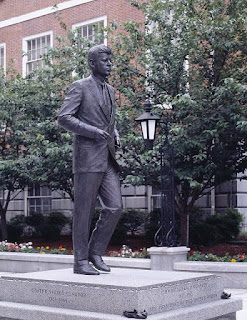 Tourists, school children and local residents are once again able to stand next to the beloved statue of President John F. Kennedy which stands alongside other famous Bostonians on the front lawn of the MassachusettsState House.

The 8 foot 2 inch tall bronze depiction of President John F. Kennedy, purposeful and confident in full stride, was created by sculptor Isabel McIlvain of Sherborn,  and unveiled on May 30, 1990.   Nearby are statues of Daniel Webster, Horace Mann and Anne Hutchinson.

This area of the statehouse was closed off on September 11, 2001, and stayed closed due to security reasons.  But recently, government officials agreed to open access to the front law from April through October, from 9:30 a.m. to 4:30 p.m..

The Massachusetts State House has self-guided tour information about State House the building and grounds, which includes numerous statues and plaques that tell the story of the state’s illustrious political history.

For more about ’s Irish history, visit IrishHeritageTrail.com
Posted by irishboston.blogspot.com at 12:40 PM No comments: