From Honey Fitz to Sweet Caroline: A Century of Fenway 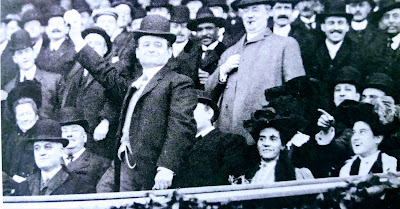 Mayor John F. "Honey Fitz" Fitzgerald waves to the fans at Fenway Park, 1912
Read the article by Michael Quinlin in the June/July 2012 issue of Irish America Magazine entitled From Honey Fitz to Sweet Caroline: A Century of Fenway.

And read this story in the Irish Echo entitled Fenway Park Marks a Very Green Century.

And finally, here's a profile of Charles E. Logue, the Irish immigrant from County Derry who built Fenway Park, breaking ground on September 25, 1911, and finishing the park by April, 1912 for the opening of the Red Sox season.

Fenway Park is one of 20 landmarks on Boston's Irish Heritage Trail.