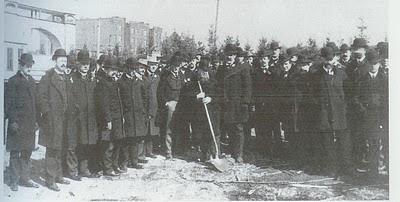 The official groundbreaking for the construction of Boston's new baseball stadium at Fenway Park took place on Monday, September 25, 1911.

The park was built by Charles E. Logue, (1858-1919) an Irish immigrant from Derry, Northern Ireland, who arrived in Boston in 1881 and headed up numerous construction projects, including a number of churches and campus buildings for the Boston Archdiocese.

The notion of having the park finished by April 1912, in time for the start of the Boston Red Sox season, seems ambitious, looking back, since a lot of the construction work had to be completed during the New England winter.

A progress report in The Boston Globe, dated January 28, 1912, states, "Work has been rushed all winter, and not until the recent cold spell was there much delay....Everything is in the rough, but a journey about the plant shows what remarkable headway has been made."

Read more on the Irish Boston experience, dating from the 18th century to the present.

Posted by irishboston.blogspot.com at 12:29 PM