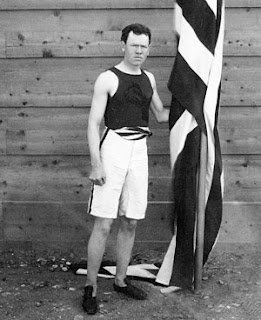 On April 6, 1896, James Brendan Connolly of South Boston became the first medalist in the modern Olympic Games when he won the triple jump on the opening day of the Games in Athens, Greece.

He won the event - back then it was called the Hop, Skip and Jump - by jumping 44 ' 9 3/4", beating the second place finisher by nearly six feet.  After his final jump, the audience began chanting his name and yelling Nike, the Greek word for victory, according to Connolly's teammate, Ellery H. Clark.

Connolly and his American teammates nearly missed their events - they arrived in Athens thinking they had twelve days to prepare, only to realize that the Greeks used the Julian Calendar, not the Gregorian Calendar, and his event was that afternoon.  Connolly later recounted the story in his autobiography: Sea Borne: Thirty Years Avoyaging.

Connolly also competed in the 1900 Olympic Games in Paris, and took second place in the Triple Jump.  Beverly Cronin of the Boston Herald wrote, "In typical Connolly fashion, he walked the seven miles to Paris Stadium because he couldn't afford the taxi fare."

Connolly later became an advocate for amateur sports, and also ran for US Congress in 1914, representing the Progressive Party.   Throughout his adult life he pursued a career of writing.  He authored 25 books, largely about the sea, and dozens of short stories.  He also worked as a journalist, covering the Spanish-American War in 1898, World War I,  and the Irish Civil War in 1920.  In the 1930s he ran a literary journal called Limelight.

Connolly's papers are held in two collections: at Colby College in Maine and Boston College in Massachusetts.

The James B. Connolly statue in South Boston is part of the Boston Irish Heritage Trail, a collection of memorials in downtown Boston and its neighborhoods that chart the Irish experience in Boston dating back to the 1700s.

Find year round details on Irish activities in greater Boston by visiting IrishBoston.org.

Posted by irishboston.blogspot.com at 3:03 PM