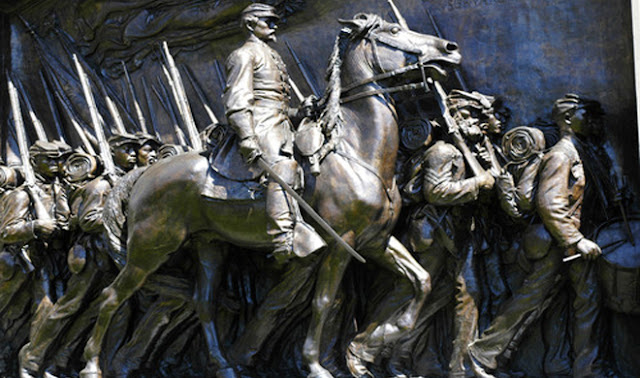 The Massachusetts Historical Society has an exhibit called, "Tell it with Pride: the 54th Massachusetts Regiment and Augustus Saint-Gaudens' Shaw Memorial," through May 23, 2014.  The exhibit is free and open to the public.

The exhibit, organized by the National Gallery of Art in Washington, DC,  conveys the magisterial monument to the nation's first Black military regiment, led by Colonel Robert Gould Shaw, as created by famed sculptor Augustus Saint-Gaudens.

The monument took fourteen years to complete, because of disagreement among patrons regarding how the piece should look.  Plus, the perfectionist artist approached the project in a painstaking manner, seeking out forty black men in New York to use as models, from which he chose 16 to appear on the final memorial.  The memorial was unveiled in 1897 at a ceremony attended by Booker T. Washington, philosopher William James, and the families of the soldiers.  It is located at the site where Civil War regiments mustered before going off to war.

Saint-Gaudens was born in Dublin, Ireland, in 1848, the son of a French cobbler and his wife, Mary McGuinness.  Fleeing the Irish Famine, the family arrived in Boston in September 1848, but finding no work, moved to New York after six months, according to the book, Irish Boston.

The Shaw Memorial is located on Boston's Irish Heritage Trail, a walking trail of 20 sites in downtown Boston and the Back Bay that convey 300 years of Irish presence in Boston.

For more about civil war memorials made by Irish-American sculptors, read this story in Irish America Magazine.

Posted by irishboston.blogspot.com at 12:58 PM