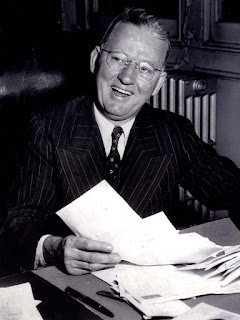 Boston Globe reporter Andrew Ryan, who is covering Mayor Marty Walsh's trip to Ireland, has written in Monday's paper that another Boston mayor, also from Dorchester and with Galway roots, visited the old country back in 1953, according to Pat Hynes, a member of the Galway City Council.

That was Mayor John B. Hynes, who served three terms as mayor, from 1950-1959.  Hynes left Logan International Airport for Shannon Airport in Ireland on October 15, 1953, the first leg of a trip that would also take him to France, Italy, Turkey, Lebanon, Syria, Jordan and Israel, where he joined other U.S. Mayors on a fact finding visit.

Once in Ireland, Mayor Hynes sent his own dispatch to the Boston Globe on October 16, describing his drive from Shannon to Dublin, traveling the 140 miles through Limerick, Tipperary and Kildare. He was joined by his wife Marion, three of his five children, and a coterie of city hall officials and friends.

On October 17 he traveled to Loughrea, County Galway, where his father Bernard Hynes was born and raised before emigrating to Boston.  There he reconnected with his uncle John Hynes, who had also lived in Boston for a time.  The Loughrea Town Council hosted a luncheon for the mayor and his family.

Hynes was a career municipal employee who was appointed as temporary mayor in 1947 when Mayor James Michael Curley was sentenced to serve time in a federal institution.  He ran for office in 1949, defeating Curley and Patrick J. McDonough.  On his Ireland trip, Hynes remarked that his two opponents were not only Irishmen but Galwaymen, "leaving the voters with very little choice."

Hynes was referred to around Boston as "the Galwayman."

According to his biography, Hynes was a self-made man who served in World War I and got a law degree from Suffolk University.  He lived at 31 Druid Street in Dorchester for his entire life.

Hynes is often credited with helping to usher in the New Boston.  In 1988, the new convention center in Boston's Back Bay was named the John B. Hynes Veterans Memorial Convention Center in his honor.

Posted by irishboston.blogspot.com at 10:16 AM