Irish Storyteller Seumas McManus Speaks on "The Problem of Ireland" in Bangor, Maine 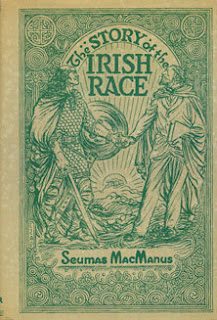 Donegal poet and storyteller Seamus MacManus gave a lecture in Bangor, ME on November 2, 1914, regarding the Irish and World War I.  He told his audience that "a great majority of the Irish people were not in sympathy with England in the present war and that most of them hoped that England would be severely beaten," according to a report in The Boston Globe.

Author of numerous books, including the popular The Story of the Irish Race, MacManus was considered a master storyteller in the old Irish tradition.  In 1900, The Boston Globe ran a six-part series of the author's stories and observations.   MacManus also lectured regularly in greater Boston, at places like Notre Dame Academy and Hibernian Hall in Roxbury and Boston College.  He was a frequent guest lecturer at Notre Dame University in Indiana.

Posted by irishboston.blogspot.com at 12:43 PM