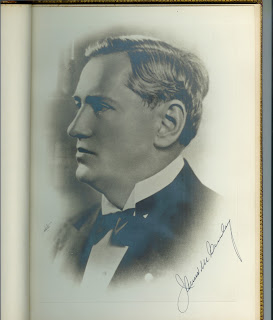 "The opening night of Roxbury's first Christmas Carnival brought 20,000 people to the business district of that section of the city," reported The Boston Globe on December 15, 1914.

Holly was stretched on tall flagpoles along Washington Street and Warren Street and on Dudley Street near the elevated stations.  Ferdinand's Store was covered with blue and white decorations and the Houghton & Dutton Store on Ruggles Street was transformed into a Yuletide picture illuminated with hundreds of lights, the story reported.

The parade was the highlight of the event, in which Santa Claus "substituted a motor truck for his reindeer sleigh and a honking horn for his jingling bells," followed by a line of 90 automobiles.   Among the dignitaries behind Santa were Mayor James Michael Curley, City Councilor Alexander McGregor and Frank Ferdinand, president of the Board of Trade.

A big part of Roxbury's business stagnation, according to officials, was due to poor transportation to and from the neighborhood.

Mayor Curley declared that "after witnessing this celebration I would have no hesitation in advocating for the establishment of a Union Station in the territory bounded by Dorchester Avenue, Albany Street, Dover Street and Southampton Street" as a way of connecting Roxbury to downtown Boston.

Councilor McGregor said, “Everything comes to him who waits is philosophy of other days, not any more in harmony with our times than are the customs of those days.  These restless times demand action, movement, aggressiveness.  A waiting policy is not as a rule a popular one and our generation rather believes that nothing comes to him who waits.  If you want something go after it; no other way is possible."

The carnival continued through Christmas eve, with nightly events planned.

Posted by irishboston.blogspot.com at 10:32 PM