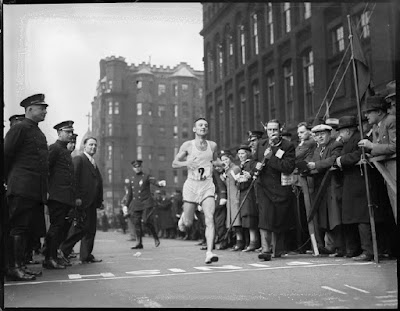 For the 120th running of the Boston Marathon taking place on Monday, April 18, 2016, we pay tribute to the amazing John Adelbert  Kelley, who holds the record for running more Boston Marathons than any other athlete.

In 1993 the Boston Athletic Association erected a statue honoring Johnny Kelley on Heartbreak Hill in Newton.  The twin statues depict Kelley in 1935 and again in 1995, holding hands as they cross the proverbial finish line.

For more on Boston Irish history and heritage, visit IrishHeritageTrail.com or visit IrishMassachusetts.com.