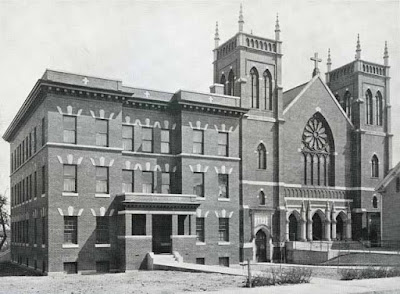 Photo Courtesy of the Dorchester Atheneum

On Sunday, May 28, 1916, William Cardinal O'Connell "blessed the walls of the new Church of St. Ambrose in Dorchester," according to a report in the Republic Newspaper.

It was the 11th Catholic Church in Dorchester, wrote the Republic. The parish had been formed on December 4, 1914,and founding Father John P. Harrigan broke ground for a lower church in March 1915.  According to The Boston Globe, church services were initially held at the Dorchester Theatre and in the old Dorchester Post Office prior to the church being completed.

On this day, Cardinal O'Connell, assisted by Father Harrigan, confirmed over 200 children from Dorchester at the service.  Nearly 100 members of the Knights of Columbus escorted the Cardinal and his  entourage to and from the ceremony.  The St. Vincent's Boys Cadets of South Boston were also present, the media reported.

Among the guests were Mayor James M. Curley and his wife Mary.

"The church was crowded to its capacity during the services, hundreds outside being unable to gain admission," wrote The Boston Globe.  "Two women fainted in the church, but revived on reaching the open air."

In his sermon, Cardinal O'Connell said, "See what the Catholic Church means and signifies at the present day.  Think of the great wealth of benediction which the Catholic Church gives...which protects the laborer and in the poor; which guides the learned and the rich and the ruler invariably and infallibly; which signifies the conditions under which we ought to live, and brings happiness; which sanctifies the family and keeps it pure and holy, and the fire of love and veneration really always aflame; which brings up the little children in the law of Christ, in the reverence, obedience and respect which is due to the parents; and which is but the beginning of a great and larger reverence to society, the State and the world which every one placed therein must learn sooner or later."

Read this editorial by Ed Forry of the Dorchester Reporter entitled St. Ambrose Has Kept the Faith, published in 2014.

The Dorchester Atheneum has more information on the history of St. Ambrose Church, compiled by historian Anthony Sammarco.  Here is information about Fields Corner in Dorchester.