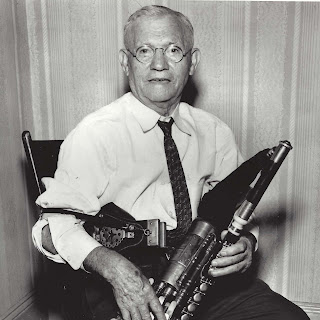 "One of these pipers, Patrick Brown of , is 80.  He was an outstanding player and noted for making the highly complicated, delicate reed pipes.  Because of failing health, he has not been devoting too much time to the Irish pipes."

A native of Killorglin, County Kerry, Brown was also a noted uilleann pipes maker, crafting sets of pipes in his Dorchester basement, according to a story in a June 1993 issue of An Piobaire.

“Another top master," writes Ms. Bright, "is Daniel J. Murphy, 74 of , .  For years he has pursued the hobby and has provided dance music for Irish charitable benefits.  But he too, has given up playing the instrument in public about 10 years ago."

Murphy, also from County Kerry, was the uilleann piper in the famous Dan Sullivan's Shamrock Band, which was popular in Boston in the 1920s and 1930s.

The third uilleann piper interviewed, Joseph Walsh of Jamaica Plain, noted that “Irish pipers in  and  are fairly well organized and stage numerous competitions.  But in , he said, the hobby is fast dying."

The reporter also interviewed an Irish dancer in the story.  “Keen to promulgate the Uilleann pipes is James McCarthy of Somerville, a member of the Eire Society, which is so actively interested in Irish culture and lore.  Although Mr. McCarthy does not play these pipes he teaches Irish dances and would like to see the traditional instrument played at Irish get-togethers."

In his 1913 book, Irish Minstrels and Musicians, Francis O'Neill recounts several pipers of note with Boston ties, starting with Ned "The Dandy Piper" White, who lived in Roxbury in the mid-19th century, made pipes, performed and ran a dance hall during the Civil War period.  He also mentions Patsy Touhey, whose family emigrated from Galway to South Boston in 1868; William Hanafin, who came to Boston in 1889;  Eddie "Kid" Joyce, born in Boston in 1861 and the son of Galway piper James Joyce; and John Murphy, born in Boston in 1865 and the son of Bartley Murphy, a gifted piper who taught his son to play the pipes as well as Touhey and Joyce.

In 1910, the newly-formed Boston Pipers Club held its first concert January 11 at Wells Memorial Hall in the South End featuring William Hanafin and his brother Michael on fiddle.  In the audience were uilleann pipers Patsy Touhey and Sergeant James Early from Chicago.

Today you can find uilleann piping through the Boston Uilleann Pipers Club or the Boston chapter of Comhaltas Ceoltoiri Eireann.  Last month, there was an International Uilleann Piping Day celebration at the Canadian American Club in Watertown, MA on November 4.

In Ireland, visit the Na Piobairi Uilleann (NPU), the Society of Uilleann Pipers founded in 1968 when "there were less than 100 uilleann pipers remaining," according to the web site.  It is located at 15 Henrietta Street in Dublin.

Posted by irishboston.blogspot.com at 6:06 PM