The Colonial and Revolutionary Flags 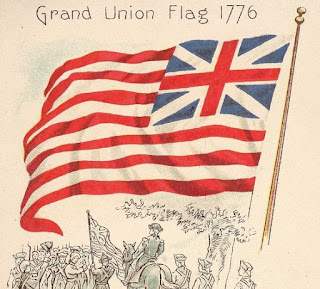 Here is an interesting summary of the variety of flags in the colonies at the start of the American Revolution, as reprinted in Irish American Almanac in 1876.  The original source, according to the Almanac, was Appleton's American Cyclopaedia.

"In the beginning of the American Revolution a variety of flags were displayed in the revolted colonies. The Union flags,  mentioned so frequently in the newspapers of 1774, were the ordinary English red ensigns, bearing the Union Jack. These generally bore some patriotic motto, such as  "Liberty," " Liberty and Property," " Liberty and Union," etc. It is uncertain what flag, if any, was used by the Americans at Bunker Hill. That displayed by Putnam on Prospect Hill, on July 18th following, was red, with Qui transtulit sustinet (He who transplanted sustains) on one side, and on the other, " An Appeal to Heaven."

"The first armed vessels commissioned by Washington sailed under the pine-tree flag, a white flag bearing a green pine-tree. The first republican flag unfurled in the Southern States, blue with a white crescent in the upper corner next to the staff, was designed by Colonel William Moultrie of Charleston, at the request of the Council of Safety, and was hoisted on the fortifications of that city in September, 1775. The flag displayed on the east bastion of Fort Sullivan, afterward called Moultrie, on June 28, 1776, was the same, with the word " Liberty " on it.

"On the west bastion waved the flag called the "Great Union," first raised by Washington at Cambridge, January 2,1776.  This consisted of the thirteen alternate red and white stripes of the present flag of the United States, with the crosses of St. George and St. Andrew emblazoned on the blue canton in place of the stars.

"This flag was carried also by the fleet under command of Commodore Esek Hopkins, when it sailed from the Delaware capes, February 17, 1776. Hopkins had displayed previously a yellow ensign, bearing the device of a rattle snake in the attitude of striking, with the motto "Don't Tread on Me."

"The official origin of the "grand union" flag is involved in obscurity. At the time of its adoption at Cambridge, the colonies still acknowledged the legal rights of the mother-country, and therefore retained the blended crosses of St. George and St. Andrew, changing only the field of the old ensign for the thirteen stripes, emblematic of their union. After the Declaration of Independence, the emblems of British union became inappropriate, but they were retained in the flag until the following year.

"Congress resolved, on June 14, 1777 "that the flag of the thirteen United States be thirteen stripes, alternate red and white ; that the union be thirteen stars, white in a blue field, representing a new constellation.""
Posted by irishboston.blogspot.com at 5:09 PM