The National Peace Jubilee, a gigantic music celebration of peace after the American Civil War, took place in Boston on June 15-19, 1869.

The event was organized by Patrick S. Gilmore, celebrated cornetist and bandleader who emigrated from Ballygar, Galway to Boston in 1849.  Gilmore is credited with ushering in the July 4 celebration in Boston, ushering in the New Year's Eve countdown in Times Square, NYC, and also writing the Civil War anthem, When Johnny Comes Marching Home.

Over 1,000 musicians and 10,000 vocalists participated in the National Peace Jubilee inside of a giant coliseum built especially for the festival.  The building itself measured 500 x 300 feet, with a height of 86 feet.  There were 12 entrances, each 24 feet wide, to accommodate the 50,000 people who attended each day.  According to newspaper accounts, two million feet of timber was used to build the stadium, and 20 tons of iron nails, bolts and bars.

The coliseum was originally sought for Boston Common, but strong opposition from local residents and city leaders prevented it.  Instead it moved to the Back Bay near where Trinity Church and the Prudential Building stand today. 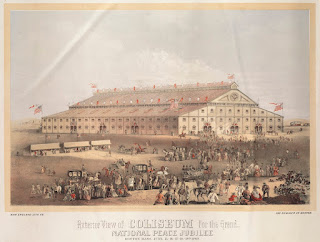 Among the attendees were President Ulysses S. Grant and members of his cabinet and family, Admiral Farragut, Commodore Rogers and other military leaders. The band played, See, the Conquering Hero Comes, when President Grant entered the hall.

Total receipts for the jubilee were $413,000, and expenses were $312,000.  A majority of the funds were distributed to groups representing disabled soldiers, and widows and orphans of deceased soldiers in cities and towns throughout New England.  Mr. Gilmore received $50,000 and the grateful city gave him a house and lot, valued at $25,000.

A favorite of the festival was the performance of Giuseppe Verdi's Il Travatore, which included the famous Anvil Chorus, in which 100 Boston Firemen, dressed in red shirts, pounded the anvils in unison to the delight of the crowds and the president himself.

On the final day of the Jubilee, 8,000 Boston school children gave a concert, performing a number of patriotic hymns and popular songs.

Gilmore organized a second jubilee in 1872, entitled the World Peace Jubilee, which doubled the number of musicians and singers.  It became the largest musical event in history, eclipsing Gilmore's 1869 jubilee.