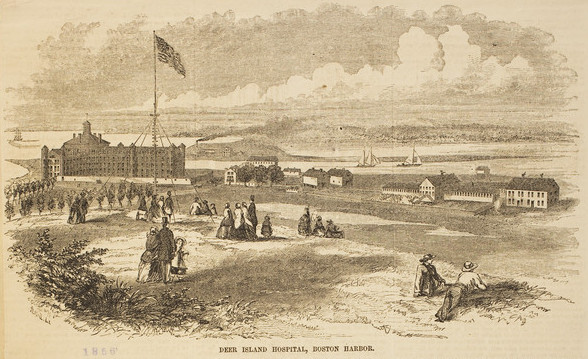 On June 1, 1847, Mary Nelson became the first Irish immigrant to die at the new quarantine hospital at Deer Island.  She died of typhus fever and was six years old.

A few days earlier, on May 27, city officials had opened the quarantine station on the island to monitor the ships coming from Ireland and Britain filled with refugees who were sick or dying from a variety of diseases, ranging from typhus fever and consumption to cholera and convulsions.  The Irish were fleeing the devastation on successive potato crop failures that triggered poverty and disease, conditions that were exacerbated by the failure of the British overseers of Ireland to address the problems.

The first ship to be placed in quarantine was the Brig John Clifford from Galway.  It arrived in Boston on May 27, and the first patients were taken to the Deer Island Hospital on May 29, 1847, according to Dr. John McColgan, archivist for the City of Boston.  By the end of the week more than 100 patients were hospitalized.

Prior to the opening of the quarantine station that month, sick passengers arriving from Ireland were being allowed to come into Boston, as long as the head tax was being paid by the ship masters.  Many of the passengers became sick within a few days of arriving and ended up at the Alms House in South Boston, which quickly experience an outbreak of death among the patients.  In the last week of May, the total number of patients at the Almshouse was 812, "of whom 94 were admitted during the present week.  There have been 13 deaths during the same period and 53 discharged," according to an item in the Boston Traveler.

Commenting on the new hospital at Deer Island, a local nativist newspaper called American Signal wrote, "Quite a move of our wise city fathers, after they have allowed the city to be filled with pestilence, pauperism and crime.  It is like shutting the barn door after the horse is stolen."

Because of its proximity to sea air and wind, and its distance from the crowded tenements of Boston’s ghettoes, the Deer Island Hospital proved beneficial for the Irish who had contracted typhus, often called ship fever, and other airborne diseases.

The Boston Medical and Surgical Journal, in its June 16, 1847 issue, wrote that “bad food, and the huddling together of men, women and children in the hold of a ship for weeks, engender the disease which is brought to our shores….The only efficient remedy, certainly the first source of relief, is a fresh atmospheric exposure.”

The idea for an Irish Memorial was first raised in the 1990s when the bones of interred Irish were inadvertently uncovered during construction of the region's wastewater treatment facility.  The Mass Water Resources Authority (MWRA) worked with local Irish-American organizations and Boston historians to find a fitting memorial to the Famine generation, as well as American Indians who were buried here during the King Phillips War in 1676.

In June 1997, a temporary Celtic cross was placed on Deer Island as part of a worldwide commemoration of the 150th anniversary of the Irish Famine, and plans were set in motion to place a permanent memorial on the island. 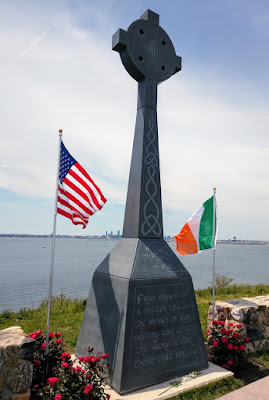 Finally, on May 25, 2019, thanks to the volunteer efforts of local residents and Irish-American leaders along with officials from the MWRA, a permanent Irish memorial was unveiled at Deer Island to the memory of those Irish who died and perished on the island during the Famine years.  The ceremony was attended by city officials, Catholic clergy, and by several hundred local residents and representatives from Irish-American organizations.

A copy of the Deer Island Death/Burial Registry between 1847 and 1850 is kept at the City of Boston Archives.

Posted by irishboston.blogspot.com at 2:18 PM

New comments are not allowed.