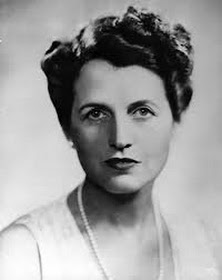 Rose Fitzgerald Kennedy, mother of President John F. Kennedy, was born on July 22, 1890 at 4 Garden Court in Boston's North End, at a time when the neighborhood was heavily Irish.

Her father, John "Honey" Fitzgerald, was a prominent businessman and newspaper publisher of The Republic and her mother was Mary Josephine Hannon.

When Rose married Joseph P. Kennedy of East Boston on October 7, 1914, it marked the merger of Boston's two most influential Irish political families. The newlyweds bought their first house at 83 Beals Street in Brookline, where they raised four boys and five girls.  The JFK Home in Brookline is managed by the National Park Service and is open to the public.

Their second eldest son, John Fitzgerald Kennedy, became the first Catholic President of the United States in 1960.  Sons Robert and Edward were senators and played key roles in the Kennedy Administration, with Robert serving as the US Attorney General. Their daughters, Jean Kennedy Smith, was U.S. Ambassador to Ireland, and played a role in the peace process between Ireland and Northern Ireland, which resulted in the Good Friday Agreement in 1998, while Eunice Kennedy Shriver was the originator of the Special Olympics.

Through her life, Rose Kennedy captured the American public's imagination because of the suffering she endured and the grace she displayed during the untimely deaths of several of her children.

She was extremely religious and was a daily communicant at St. Joseph's Church in Hyannis.  In 1951 Pope Pius XII named her a Papal Countess, in recognition of her "exemplary motherhood and charitable works."  In 1996, Irish novelist and playwright Mary Manning Adams wrote a play about Rose Kennedy's life entitled "Go Lovely Rose."

Rose died in 1995 at age 105.  Her funeral mass was held at St. Stephen's Church in the North End, where she was baptized and attended mass as a young girl.

The Rose Fitzgerald Kennedy Garden, built in 1987, is the first stop on Boston's Irish Heritage Trail.

The small enclosed rose garden, encircled by an iron wrought fence, with a granite fountain as the centerpiece. It is part of Christopher Columbus Park, which runs along the waterfront and looks out onto Boston Harbor. The Garden was officially dedicated on July 22, 1987 by Rose’s family, including Senator Edward M. Kennedy, who called his mother “the greatest teacher and most wonderful mother that any child could ever have.” 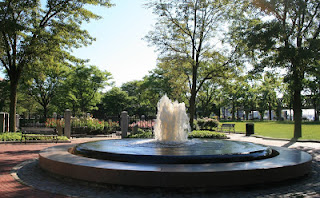 Today, the Rose Kennedy Garden has 104 rose bushes, one for every year of Rose’s life.

The Rose Fitzgerald Kennedy Greenway opened in 2008.  The 27 acre swath of Greenway once lay beneath the unsightly and noisy Central Artery, a four lane, mile and a half highway built in the 1950s.  When the highway finally came down, the greenway began to take shape, connecting the city’s waterfront to the rest of downtown. 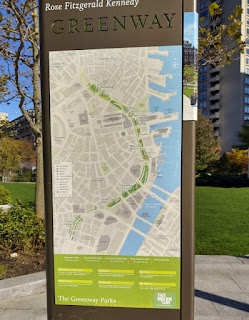 Today, the Rose F. Kennedy Greenway is one of the city’s most popular public spaces, drawing office workers, tourists, students, conventioneers and local residents to enjoy its sweeping vistas and friendly amenities.  With a magnificent Carousel, public art, water fountains, concerts, food courts, Wi-Fi access and well-tended gardens, the Greenway serves its mission of being an urban oasis that is free and open to all.

Posted by irishboston.blogspot.com at 9:35 AM