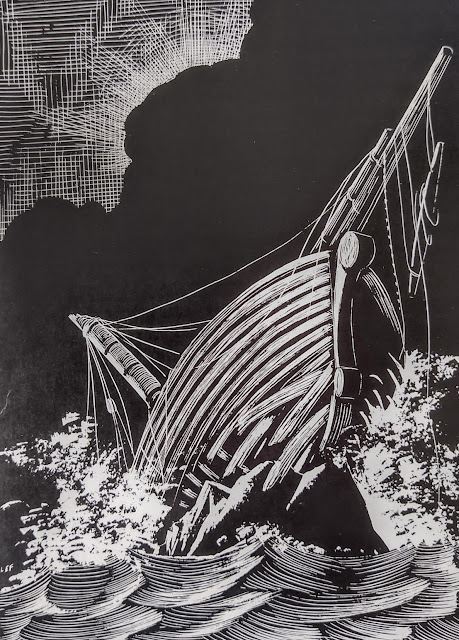 Illustration by Leonard Everett Fisher
A passenger ship called Brig St. John sank off the coast of Cohasset on the morning of Sunday, October 7, 1849, pushed to the brink by a severe nor'easter that rocked the boat for hours before it sank. On board the ship were 127 passengers from Ireland, along with sixteen sailors. The majority of passengers were poor Irish immigrants fleeing the famine.
Writer Henry David Thoreau heard about the wreck and traveled from Concord to witness the aftermath. He wrote about it in his book, Cape Cod. "We found many Irish in the cars going to identify bodies and to sympathize with the survivors, and also to attend the funeral which was to take place in the afternoon," Thoreau wrote. "When we arrived at Cohasset, it appeared that nearly all the passengers were bound for the beach, which was about a mile distant, and many other persons were flocking in from the neighboring country." 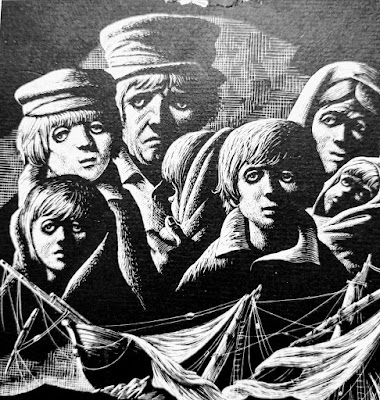 Illustration by Leonard Everett Fisher
Only 9 crew members and 11 passengers survived, according to reports. Most of the others drowned at sea, except for 45 bodies that were washed ashore. They were never identified and were buried in a mass grave.
On May 30, 1914 the Ancient Order of Hibernians erected a 19 foot Celtic Cross in the town's Central Cemetery to pay homage to the deceased.
Governor David I. Walsh gave the oratory before several thousand onlookers. "Love of the dead is one of the kindest traits of the Irish character; the memories of the dead are kept green and fragrant, and custom has been sanctified by religion," Walsh said. "This memorial erected here upon the round-bound coast to those exiles cast upon the shore is evidence that the hearts of the American Irish are still true to the kindly and reverent traditions of the race."
For more details on Irish-American heritage, visit Boston's Irish Heritage Trail.
(Illustrations from the book, Across the Sea from Galway, written and illustrated by Leonard Everett Fisher, published in 1975 by Four Winds Press.)