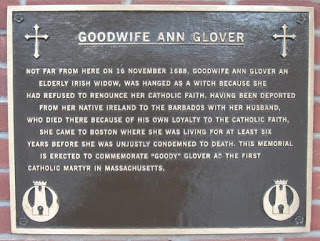 On November 16, 1988 Boston City Council proclaimed Goody Glover Day, in tribute to Goodwife Ann Glover, an Irish women accused of being a witch by Cotton Mather and other Boston Puritan leaders.  Raymond L. Flynn was mayor.

An editorial in The Boston Globe, dated November 17, 1988, noted that a group of academics and a businessman "have formed a committee to erect a memorial on Boston Common or at the State House, where statues commemorate Anne Hutchinson and Mary Dyer, who were also victims of religious intolerance.   A memorial to Glover would be a reaffirmation by today's citizens that bigotry in any form is intolerable. The efforts deserve support."

Glover was an Irish captive sent to Barbados by Oliver Cromwell in the 1650s.  Her husband died there, and by 1680 she and her daughter were living in Boston, employed as housekeepers by John Goodwin.  In summer 1688 four of the five Goodwin children fell ill.  The doctor concluded "nothing but a hellish Witchcraft could be the Origin of these maladies."  Martha, the 13 year old daughter, confirmed the doctor's diagnosis by claiming she became ill right after she caught Glover stealing laundry.
Glover was arrested and tried as a witch. In the courtroom there was confusion over Glover's testimony, since she refused to speak English, despite knowing the language.  According to Mather, "the court could have no answers from her, but in the Irish, which was her native language." The court convicted Glover of witchcraft and sentenced her to be hanged on November 16, 1688.
James B. Cullen, author of The Story of the Irish in Boston (1889) wrote, "she was drawn in a cart, a hated and dreaded figure, chief in importance, stared at and mocked at, through the principal streets from her prison to the gallows….The people crowded to see the end, as always; and when it was over they quietly dispersed, leaving the worn-out body hanging as a terror to evil-doers."
It is commonly assumed that Glover was hanged at the public gallows on the Boston Common on the great elm that was destroyed in a storm in 1876.  But Cullen reported that Glover was hanged in the South End, on the site of the South End Burying Ground on Washington Street.
In 1988, a plaque was placed at Our Lady of Victories Church in Boston's South End/Bay Village neighborhood by the International Order of Alhambra, a Catholic Men's organization that marks Catholic landmarks around the world. The plaque to Ann Glover at Our Lady of Victories Church is a stop along Boston’s IrishHeritageTrail.com.
For details on Irish cultural activities year round, visit IrishBoston.org.