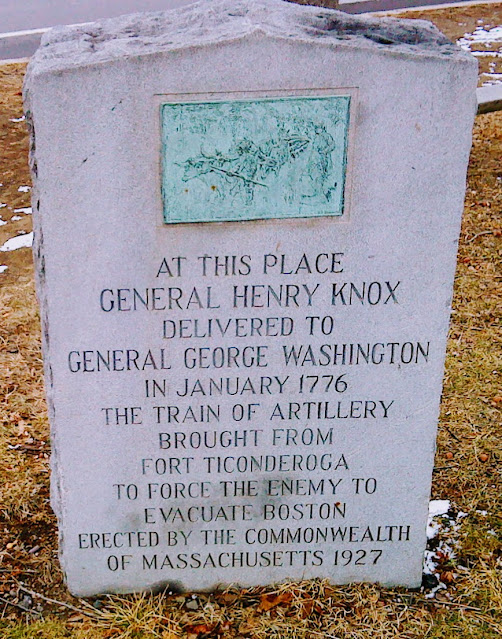 On January 24, 1776,  25 year old Boston bookseller and American revolutionary war hero Henry Knox reported to General George Washington in Cambridge that he and his volunteers had just transported 59 cannons and artillery 300 miles, from Fort Ticonderoga in   to .

The plan was to position the cannons atop   in South Boston and aim them at the British fleet in .

On March 5, British General Howe saw the guns aiming down at his fleet, and by March 17, 1776, the British troops, along with their sympathizers, evacuated Boston, ending the eleven month Siege of Boston. The daring standoff was known as Evacuation Day, and is still celebrated in Boston each March 17th.  Read more about Dorchester Heights.

Knox (1750-1806) later became a Major General and artillery commander through the Revolutionary War, and was the nation's first U.S. Secretary of War under President Washington.

Knox’s father and uncles were original members of the Charitable Irish Society, formed in 1737 to help other Irish immigrants settle in .  A bookseller by trade, Knox joined the Society in 1772, when he was 22 years old.  He also became a member of the Friendly Sons of St. Patrick in .

Knox died in  in 1806, where today the Henry Knox Museum is located. March 16, 2020
One of the biggest holidays in Boston each year occurs on March 17, an historical anniversary that is especially cherished by the Irish-American community here.   St. Patrick's Day marks   Ireland's national holiday, and the Irish have been celebrating on March 17 for centuries, going back to the 18th century when the Charitable Irish Society held a small march in 1737! Read about the history of the Southie parade here .  Bostonians also celebrate  Evacuation Day on March 17th, since that i s  the date in 1776 when American colonists forced the British to flee Boston Harbor by aiming cannons on the British fleet from the highest hill in Boston, Dorchester Heights. The British presence in Boston began in October, 1768, when 4,000 British troops arrived in Boston after local citizens objected to a series of British taxes on the residents. Their presence led to a number of physical confrontations, starting with the Boston Massacre on March 5, 1770, when five Bostonians
Post a Comment
Read more

October 27, 2010
Many people wonder why the Boston Celtics wear shamrocks on their green uniforms and have a giant leprechaun smoking a cigar as their team logo. And why the team mascot is a guy named Lucky who looks like he stepped out of a box of Lucky Charms? According to the Boston Celtic’s official web site, the name came about in 1946 when owner Walter Brown started the team. He and his public relations guy, Howie McHugh, were throwing out potential nicknames, including the Whirlwinds, Unicorns and Olympics. It was Brown who had the epiphany, saying, “Wait, I’ve got it – the Celtics. The name has a great basketball tradition from the old Original Celtics in New York (1920s). And Boston is full of Irishman. We’ll put them in green uniforms and call them the Boston Celtics.” Red Auerbach , the now legendary coach of the early Celtics, then commissioned his brother Zang, a graphic designer in the newspaper business, to come up with the famous Celtics logo in the early 1950s. The logo m
Post a Comment
Read more