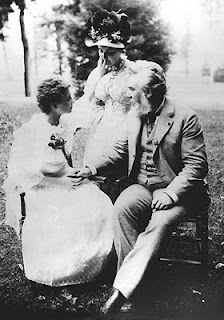 Annie Sullivan, known in her life as the Miracle Worker for her work with the blind, especially Helen Keller, died on October 20, 1936.

The daughter of impoverished Irish immigrants, Annie was born in Feeding Hills, Massachusetts in 1866.  Partially blind herself, she attended the Perkins School for the Blind in South Boston where she learned to read, write and spell.

After graduation, she was sent to Tuscumbia Alabama to teach a six year old blind child named Helen Keller.  An epiphany came for Helen one summer day when Annie splashed water on Helen's hand, then spelled out the word 'water' over and over until Helen realized that everything had a name that could be spelled out.

Keller, who later attended Radcliffe College in Cambridge, Massachusetts, became a nationally renowned leader for women's rights and a founder of the American Foundation for the Blind.  Annie remained Helen's teacher until Annie's death in 1936.

Their lives together were made into a film called The Miracle Worker, staring Ann Bancroft as Annie and Patty Duke as Helen.

In 1960, Keller placed a plague in Braille and English at Radcliffe, next to a small fountain, that reads, "In Memory of Annie Sullivan, teacher extraordinary."

For more about women in Boston, visit the Women's Heritage Trail here.

For more information on Irish heritage in Massachusetts, visit IrishHeritageTrail.com.
Posted by irishboston.blogspot.com at 1:09 PM