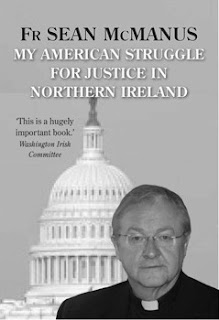 Father McManus is appearing at the AOH Hall in Watertown, MA on Wednesday, June 8, 2011 at 8:00 p.m. and is being introduced by Ray Flynn, former Mayor of Boston and US Ambassador to the Vatican.

The event is being sponsored by the Massachusetts Ancient Order of Hibernians and AOH Division 14 of Watertown.  The AOH Hall is located at 151 Watertown Street.

Then on Saturday, June 11, 2011, McManus is appearing at Noon at the Four Green Fields Pub & Restaurant at One Boston Place in Downtown Boston, where he will talk about his work and sign copies of his book.

Both events are free and open to the public.

For more about the Irish National Caucus and Father McManus, visit IrishNationalCaucus.

For more about year round Irish activities in Massachusetts and New England, visit IrishMassachusetts.com.