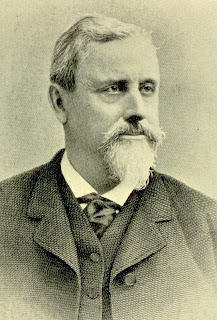 On Monday, January 5, 1885, Hugh O'Brien was sworn-in as the city of Boston's first Irish-born Mayor, launching an era of Irish-American dominance of Boston City Hall that continued through the 20th century.

O'Brien was born in County Cork, Ireland on July 13, 1827, and emigrated with his family to Boston in 1832 when he was five years old.  He learned the printing trade at the Boston Courier newspaper and at fifteen became foreman of a printing office, before starting his own publication, the Shipping and Commercial List.  He has a successful career as a businessman and gained the respect of city leaders as well as the Irish immigrant community that struggled to gain a foothold in Boston.

O'Brien launched his political career in 1875 on the Board of Alderman, and in 1884 ran against and defeated incumbent Boston Mayor Augustus Martin.  At that time, the term of office was one year, so O'Brien ran and won again in 1885, 1886, 1887 and 1888 before narrowly losing in December 1888 to Republican banker Thomas N. Hart.

While in office, O'Brien presided over the creation of the city's Emerald Necklace park system, designed by Frederick Law Olmsted, and he laid the cornerstone for the new Boston Public Library at Copley Square.

One of his most cherished causes was helping the city's orphans throughout his life.  He died on August 1, 1895, and at his funeral at Holy Cross Cathedral, the Republic Newspaper reported, "The largest and most conspicuous delegation was that from the St. Vincent's Orphan Asylum, 200 little children dressed alike, who sat immediately behind the family."

O'Brien is buried at Holyhood Cemetery in Brookline MA.

A bust of Hugh O'Brien, made by sculptor John Donoghue, is on display in the Abbey Room of the Boston Public Library.

March 16, 2020
One of the biggest holidays in Boston each year occurs on March 17, an historical anniversary that is especially cherished by the Irish-American community here.   St. Patrick's Day marks   Ireland's national holiday, and the Irish have been celebrating on March 17 for centuries, going back to the 18th century when the Charitable Irish Society held a small march in 1737! Read about the history of the Southie parade here .  Bostonians also celebrate  Evacuation Day on March 17th, since that i s  the date in 1776 when American colonists forced the British to flee Boston Harbor by aiming cannons on the British fleet from the highest hill in Boston, Dorchester Heights. The British presence in Boston began in October, 1768, when 4,000 British troops arrived in Boston after local citizens objected to a series of British taxes on the residents. Their presence led to a number of physical confrontations, starting with the Boston Massacre on March 5, 1770, when five Bostonians
Post a Comment
Read more

October 27, 2010
Many people wonder why the Boston Celtics wear shamrocks on their green uniforms and have a giant leprechaun smoking a cigar as their team logo. And why the team mascot is a guy named Lucky who looks like he stepped out of a box of Lucky Charms? According to the Boston Celtic’s official web site, the name came about in 1946 when owner Walter Brown started the team. He and his public relations guy, Howie McHugh, were throwing out potential nicknames, including the Whirlwinds, Unicorns and Olympics. It was Brown who had the epiphany, saying, “Wait, I’ve got it – the Celtics. The name has a great basketball tradition from the old Original Celtics in New York (1920s). And Boston is full of Irishman. We’ll put them in green uniforms and call them the Boston Celtics.” Red Auerbach , the now legendary coach of the early Celtics, then commissioned his brother Zang, a graphic designer in the newspaper business, to come up with the famous Celtics logo in the early 1950s. The logo m
Post a Comment
Read more