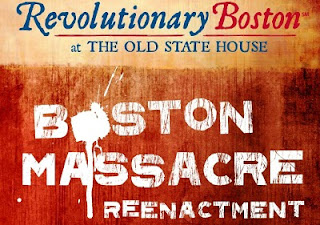 The Bostonian Society is commemorating the 242nd anniversary of the Boston Massacre this Saturday, March 10, 2012 with a series of lectures, programs and a re-enactment at the Old State House on State Street in downtown Boston.

Irish sailor Patrick Carr was one of the five victims in the Massacre, according to Irish Boston: A Lively Look at Boston's Colorful Irish Past.   Carr and the other victims are buried at the Old Granary Burying Grounds on Tremont Street, which is listed on the Boston Irish Heritage Trail.

For year round information on the Irish community in Boston, including pubs, gift shops, festivals, parades, concerts and cultural activities,  visit IrishBoston.org