Hostility to Immigrants in Boston, June 1847 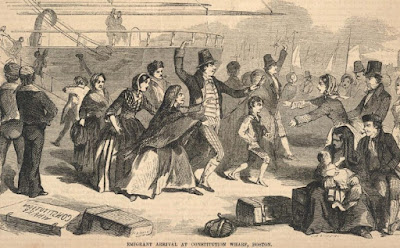 Boston Mayor Marty Walsh declared June 2014 as Immigrant Heritage Month in the City of Boston, in recognition of the positive role immigrants play in Boston, in Massachusetts and across the United States.

The plight of new immigrants coming to Boston has always been contentious through history.  Here is an excerpt from a Boston Pilot editorial dated June 19, 1847, in response to the way Irish famine refugees were being treated by certain Bostonians at that time:

"We feel a sentiment stronger than shame, when we see a portion of this community indulging in vituperation and abuse against emigrants, who this season (for various causes) are flocking in unusual numbers to our shores.  They come amongst us for a home, and if life and health are vouchsafed to them, they will earn the right to that home and whilst rescuing themselves from famine, will enrich by their labor and industry, the land that affords them a refuge."

At the same time, many Bostonians recognized the plight of the Irish and vowed to help.  They raised funds, food and medical supplies to send back to Ireland, where a famine was in full force, and also took steps to help the Irish settle in Boston.  One story that endures is the voyage of the USS Jamestown from Boston to Cork.

The editorial was prescient in forecasting that, given the opportunity,immigrants would enrich the nation "by their labor and industry."

Posted by irishboston.blogspot.com at 12:56 PM