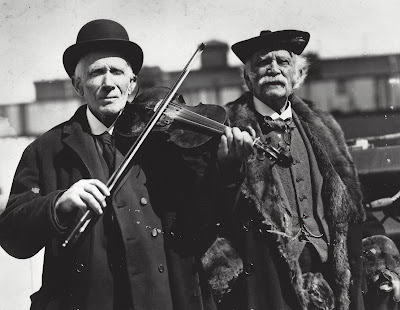 Two of the top traditional fiddlers from the British Isles, 82 year old James Scott Skinner of Aberdeen, Scotland and 76 year old John Wiseman of Bantry, County Cork, crossed the Atlantic Ocean together to compete in the World's Old Fiddlers Contest, taking place April 5-10, 1926 in Lewiston, Maine.  Both arrived in Boston on the Cunard liner Caronia, and were greeted with enthusiasm by the Irish and Scottish communities, with fiddlers, pipers and dancers lined up to greet the ship as it docked.

The contest was open to fiddlers from around the world aged 60 or older. More than 340 fiddlers competed for the $1,000 prize and Gold Cup.  Joining Skinner and Wiseman were other notable fiddlers, including Mellie Dunham, Chas E. McBride, 80 year old John Wilder of Vermont and uncle of President Calvin Coolidge, and local favorite "Uncle John" McKenney of Lewiston.

The contest was broken out into categories such as Irish Night,  Scottish Night, American Night and Canadian Night, and all six of the New England states had representatives.

Wiseman became ill on the journey over and had to be hospitalized in Boston after he arrived.  Despite medical advice, he journeyed to Maine in a car accompanied by two nurses, one of whom stood next to him on stage as he gamely played tunes.  Right after the contest, Wiseman returned to the hospital in Boston until he recovered.

Skinner, considered one of the most prominent Scottish fiddlers and composers of his generation, told reporters that "I'm going to America to kill jazz" when he left from the Liverpool docks in March.  When he arrived at the competition, he learned that stratsphys were not permitted to be played, and in addition, he had issues with the pianist accompanying him.  He walked off the stage.

The eventual winner was 67 year old John Claffey of Boston, a professional musician who had played for the Boston Symphony Orchestra and was a member of the Boston Union of Musicians.  After the contest, Maine fiddler John McKenney publicly challenged Claffey to a rematch, stating that although the judges "tried to be fair," he would travel to Boston for a rematch and "let the people decide."

Back in his hospital bed, Wiseman sent his congratulations to the winner,  saying, "I'm glad than an Irishman won, even though he lives in Boston."

In the 1920s, Old-Time music and dancing were enthusiastically sponsored by automobile magnate Henry Ford as a way to highlight the traditional culture and values of his rural youth.


Researched and written by Michael Quinlin.