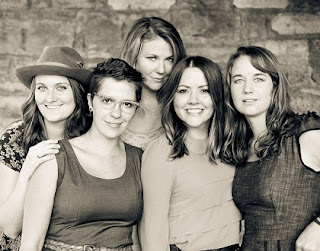 Rockport Music presents the Nashville-based string band Della Mae at the in Rockport on Wednesday, August 15, 2018.  Tickets are available online.

Since forming in Boston in 2009, Della Mae was named IBMA’s Emerging Artists of the Year in 2013, GRAMMY Nominees in 2014 for their debut album on Rounder Records, named among Rolling Stone’s “10 bands to watch for in 2015.” The band has traveled with the US State Department to over 18 countries spreading peace and understanding through music.

Here is a schedule of upcoming concerts at the Shalin Liu Performance Center.

For year round details on Irish, Celtic and folk music in New England, visit IrishMassachusetts.com.

Posted by irishboston.blogspot.com at 7:40 AM