Boston Massacre Memorial was unveiled on Boston Common on November 14, 1888 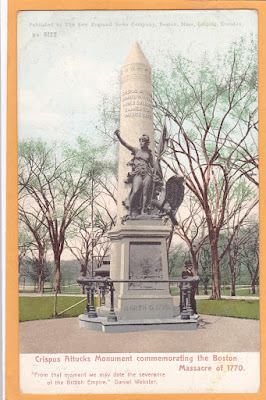 One hundred and thirty years ago, on November 14, 1888, state and city officials unveiled the Boston Massacre Memorial on Tremont Street on Boston Common.  Among the guest speakers were Governor Oliver Ames, Mayor Hugh O'Brien and State Representative Julius Caesar Chappelle, an African-American leader who advocated for civil rights, voter registration and political participation.

The sculptor was Robert Kraus, a German immigrant who attended the ceremony. The monument is made of Concord granite, 24 feet 4 inches high.

Mayor O'Brien said, " I am aware that the monument to Crispus Attucks and his martyr associates has been the subject of more or less adverse criticism, and that by some they are looked upon as rioters, who deserved their fate.  I look upon it from a entirely different standpoint.  The Boston massacre was one of the most important and exciting events that preceded our revolution."

One of the highlights of the ceremony was a poem written by Irish immigrant John Boyle O'Reilly, entitled Crispus Attucks, an African-American who was the first of the five martyrs killed by British soldiers on March 5, 1770, along with Irish immigrant Patrick Carr and Boston residents Samuel Gray, James Caldwell and Sam Maverick.

And honor to Crispus Attucks, who was leader and voice that day;

The first to defy, and the first to die, with Maverick. Carr, and Gray.
Call it riot or revolution, his hand first clenched at the crown;
His feet were the first in perilous place to pull the king’s flag down;
His breast was the first one rent apart that liberty’s stream might flow;
For our freedom now and forever, his head was the first bid low.

Attucks was from Framingham; his father was an African slave and his mother was a native American Indian.

The celebration that day began with a procession from the Massachusetts State House to the monument, then to Faneuil Hall for further speeches.  Later there was a banquet at the Parker House.

To learn about Black history in Boston, visit the maah.org/trail.htm