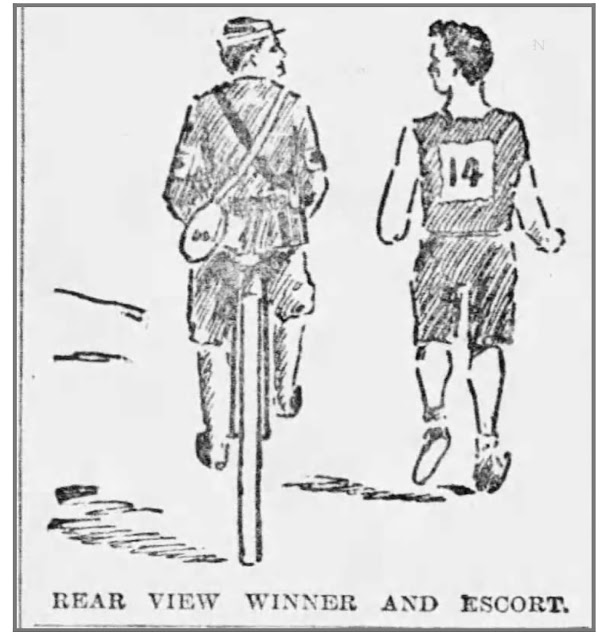 This year's  Boston Marathon, slated to take place today, is being postponed to September 14, 2020 because of the COVID-19 pandemic. The annual race is sponsored by the Boston Athletic Association (BAA).

The very first Boston Marathon was held on April 19,1897, inspired by the first modern Olympic Games held the previous year in Athens, Greece.

Thomas E. Burke, who won first place in the 100 and 440 yard races at the Athens Olympics in 1896, was the official starter of the race.  "At 12:15, Tom Burke scrapped his foot across the narrow street in front of Metcalf's Mill and called the contestants numbers," reported The Boston Globe.

The race was organized by the BAA, and the initial field that year consisted of fifteen runners, of whom ten would finish the race.   John J. McDermott of the Pastime Athletic Club of New York won the race, finishing the 25 mile course in two hours, fifty-five minutes and ten seconds.
McDermott apparently lost nine pounds running the race, and afterwards said, "This will probably be my last long race.  I hate to quit now, because I will be called a quitter and a coward, but look at my feet," he told The Boston Globe in its April 20, 1897 story.  "Do you blame me for wanting to stop it?  I only walked about a quarter of a mile in the whole distance, and it was 20 miles before I lagged a step.  I think I shall be all right tomorrow.

McDermott returned to Boston in 1898 and finished fourth.

The 1897 race started in Ashland and finished at Irvington Oval near Copley Square in Boston, which had a 220 yard track.  There BAA officials had organized an entire track and field meet, seeking to duplicate the spirit of the 1896 Olympic Games in Athens.
Among the most talked about races was the 100 yard dash, which had a stellar field that included Tom Burke of Boston University, J.S. Quinn  and W.J. Holland from Boston College, Frank Quinlan from Fordham University, and D.C. Byers of Yale.  Holland won the race, and his BC teammate Quinn took second.
For more on Boston's Irish history and heritage, visit IrishHeritageTrail.com.
Posted by irishboston.blogspot.com at 2:57 PM