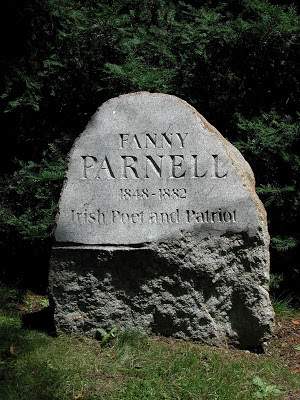 On April 11, 2001, the Parnell Society of Dublin placed a granite marker at the grave site of Ms. Fanny Parnell at Mount Auburn Cemetery in Cambridge,  honoring her role as a patriot and poet of Ireland.  The ceremony was led by Ireland’s ambassador to the United States Sean O hUuiginn, Irish government official Frank Murray and members of the Society.
Fanny was known as the Patriot Poet, a determined Irish woman of strong-mind born into a famous family with Boston connections.  Fanny Parnell used her gifts of language and intellect to express the eloquence and fury of Irish unrest in the late 19th century, and was the leading spokeswoman throughout the United States for the Ladies Land League.  Her sister Anna had founded Ladies Land League as an adjunct to the reform movement sweeping rural Ireland in the 1870s and1880s.  Their brother Charles Stewart Parnell, Ireland's great home rule leader in the latter half of the 19th century, was in jail with Land League founder Michael Davitt when the Ladies League formed.

Born in Avondale, County Wicklow, Fanny was the second of four daughters and two sons to John Henry Parnell and Delia Tudor, the American-born daughter of Admiral Charles Stewart of the United States Navy and commander of the USS Constitution.

Fanny visited Boston in May 1881 to address supporters of the land league movement.  She spoke at the Music Hall, introduced by Patrick Collins, then the head of the American Land League movement and future mayor of Boston in 1902.  Joining them on stage were poet and editor John Boyle O'Reilly and publisher Patrick Donahoe.

She began publishing her poetry in the Irish People in Dublin, the newspaper of the Fenian Brotherhood formed in 1858.  Most of her work, however, was published in the Boston Pilot, the leading Irish Catholic newspaper of the 19th century.  The Pilot published a collection of her works, entitled Land League Songs, priced at just ten cents.

Her most famous poem is probably Hold the Harvest, a powerful indictment of corrupt British land management that produced Irish famines, emigration and a weakened, discouraged peasantry.  The poem was a call for Irish farmers to keep their own harvest rather than give it to the landlords.  It reads in part:
O pallid serfs, whose groans and prayers have wearied Heaven full long
Lookup! There is a law above, beyond all legal wrong;
Rise up! The answer to your prayer shall come, tornado born
And ye shall hold your homesteads dear, and ye shall reap the corn.

Fannie died of heart failure at age 34 in Bordentown, New Jersey.  Her body was taken by train to Boston.  There the casket was open for family and friends to view her body at the Tudor home on Beacon Hill before being buried at the Tudor family plot at Mt. Auburn Cemetery in Cambridge.  Despite the Parnell family's insistence that her body remain here, numerous attempts were made to return her body to Ireland for reinterment at the Parnell family plot at Glassnevin Cemetery in Dublin.

Read more about Irish women with connections to Massachusetts.

Find more about Irish history and heritage in Massachusetts by visiting IrishHeritageTrail.com

Posted by irishboston.blogspot.com at 1:41 PM