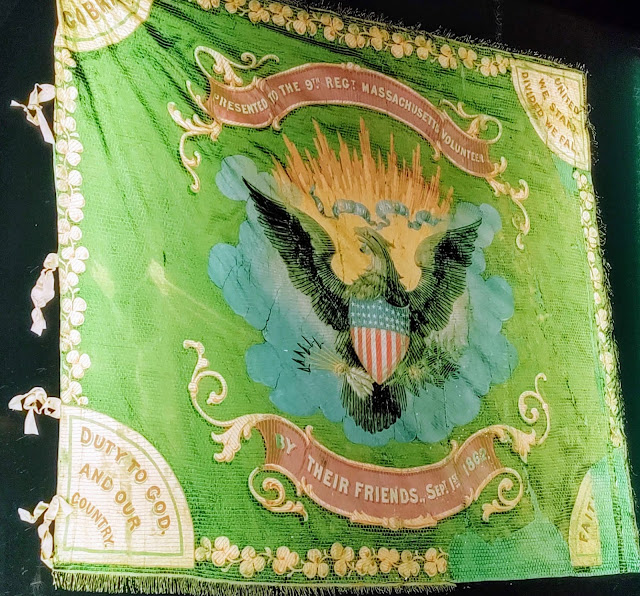 An estimated 150,000 Irish fought on the Union side in the American Civil War, including two Irish regiments from Massachusetts: the Ninth Regiment of Infantry, Massachusetts Volunteers and the 28th Irish Massachusetts Regiment.

The 9th Regiment's flag was first publicly displayed on June 25, 1861 when Colonel Thomas Cass made a formal visit to Governor Andrew to receive the state flag.  The Ninth Regiment sported an Irish flag made of green silk, with a scroll inscribed in gold that read: "Thy sons by adoption; they firm supporters and defenders from duty, affection and choice."

On June 30, 1861, the 9th arrived in Washington D.C., where they were welcomed by President Abraham Lincoln.

The Ninth Regiment saw extensive battlefield action in Virginia and Pennsylvania.  When Colonel Cass was mortally wounded at the Battle of Malvern Hill in Virginia in 1862, he was replaced by Colonel Patrick R.Guiney of Tipperary, who continued to distinguish the Regiment for its ability and courage.  Guiney himself was wounded in battle but survived.

During the Spanish-American War of 1898 the Ninth Regiment also saw action in Cuba.  The flag for that campaign was presented to the Regiment by the Ancient Order of Hibernians (AOH) of Suffolk County.  It carried that flag during the decisive Battle of San Juan Hill and the siege of Santiago, which the American forces won.  The Ninth Regiment sustained many casualties, not on the battlefield but from malaria and other tropical diseases contracted in the jungle.  Among the members of the 9th regiment were James Brendan Connolly, Olympic medalist and writer (see page__) and Lawrence Logan of Ballygar, Galway, and his son Edward J. Logan (see page)

The 28th Massachusetts Regiment, also composed of Irish troops, was officially mustered into service on New Years Eve, 1861, and carried four Irish flags during its service.  When the Regiment joined forces with the Irish Brigade in December 1862, Brigader General Thomas Meagher presented the regiment with an Irish flag similar to the New York Irish regiments he was commanding. Known as the Faugh au Ballaghs (Irish for 'Clear the Way'), the 28th had several slogans on its flags, including 'They shall never retreat from the charge of lances" and a second, placed in a scroll in an American eagle's mouth that read "Fostered under they wing we will die in they defense." 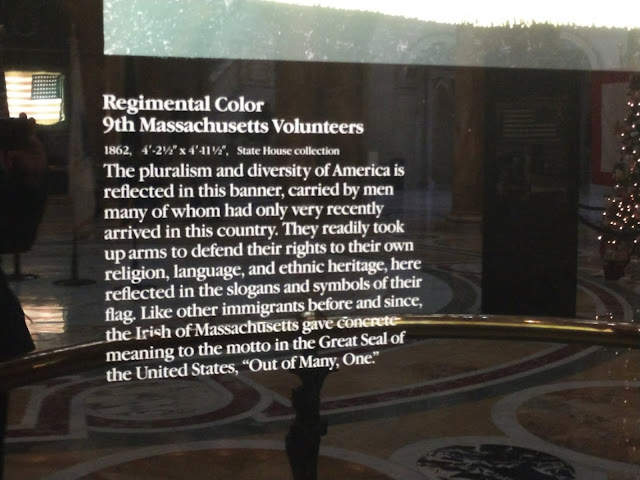 Today facsimiles of the flags are on display at Memorial Hall, the main rotunda of the State House, part of a 350 flag collection dating from the Revolutionary War to the present.  The actual flags are in an environmentally controlled storage space in the State House, and can be viewed by special appointment.

Posted by irishboston.blogspot.com at 12:53 PM