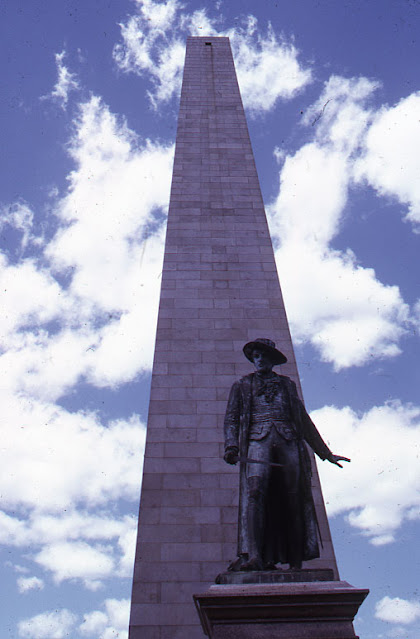 Photo by Peter H. Dreyer, Boston City Archives
Bunker Hill Day is celebrated in Boston each June 17 to mark the famous Battle of Bunker Hill, which took place on June 17, 1775 between American colonists and British troops.  The Bunker Hill Monument was built to recognize the sacrifice of the colonists fighting against British rule.

The British may have won the Battle of Bunker Hill, but the battle marked the point where "British tyranny ended and American liberty began."
The 140 American colonists who died at Bunker Hill included English, Scots, Irish, Native Americans and African Americans, a melting pot of future citizens of the nation.

Of the New England militiamen who rushed to Charlestown to defend Boston Harbor, 176 were Irish-born, and hundreds more were born of Irish parents, many of whom were indentured servants sent to the American colonies from Ireland.   Just five days earlier, on June 12, 1775, Jeremiah O'Brien and his four brothers engaged in the first naval conflict with the British off the coast of Machias, ME.
Historian Michael J. O'Brien notes there were seven Irish officers and dozens of Irish-American officers at the Battle of Bunker Hill.  They included Colonel John Stark of New Hampshire, one of the heroes of the day-long conflict.  Major Andrew McClary of Epson, New Hampshire, whose parents were from Tyrone, was killed at the very end of the battle after fighting bravely throughout the day.  Also fighting that day was Captain Ebenezer Sullivan, whose brothers James would become governor of Massachusetts and John, a general in Washington's Army, would force English troops to evacuate Boston on March 17, 1776.

In 1794 a small memorial was created, and in 1823 the Bunker Hill Memorial Association was formed to raise funds for a much larger memorial.  On June 17, 1825 Revolutionary War hero Marquis De Lafayette laid the cornerstone, while Daniel Webster gave the oration.  The 221 foot monument, with a 30 foot base, cost $100,000 to build, and was formally unveiled on Saturday, June 17, 1843.  US President Zachary Tyler and his cabinet attended the ceremony, and again Webster gave the formal address. 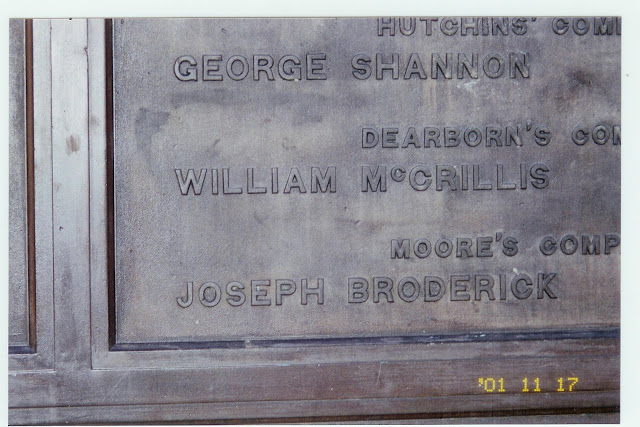 On June 17, 1889, a set of Memorial Tablets was unveiled at nearby Winthrop Square in Charlestown, listing the names of the men who fought at Bunker Hill.    The Honorable John R. Murphy of Charlestown gave the oration that day.
In the 19th century, Charlestown  became one of Boston's most distinctly Irish neighborhoods, with a strong contingent of families who settled here from Donegal.  In 1832, the Catholic Church opened the Bunker Hill Catholic Cemetery, against the wishes of the town's selectmen, in order to bury two Catholic children who had died.

On June 30, 1919, Ireland's leader Eamon De Valera visited the Bunker Hill Monument, where he laid a wreath.  Then he wrote on a piece of paper the date and the words of George Washington when he heard the Battle of Bunker Hill had taken place: "The liberties of my country are safe."  DeValera signed it and placed it on the wreath, wrote the New York Times. 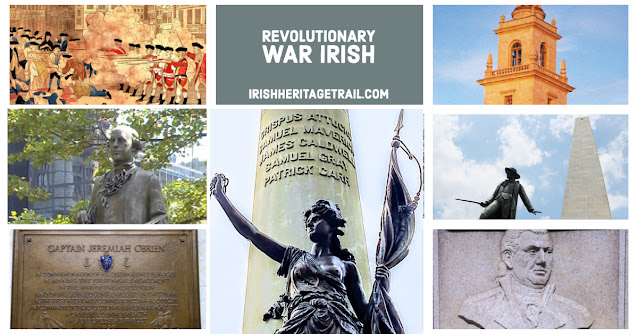 March 16, 2020
One of the biggest holidays in Boston each year occurs on March 17, an historical anniversary that is especially cherished by the Irish-American community here.   Bostonians not only celebrate  St. Patrick's Day , Ireland's national holiday; they also celebrate  Evacuation Day, the day when American colonists, on March 17, 1776 , forced the British to flee Boston Harbor by aiming cannons on the British fleet from the highest hill in Boston, Dorchester Heights. The British presence in Boston began in October, 1768, when 4,000 British troops arrived in Boston after local citizens objected to a series of British taxes on the residents. Their presence led to a number of physical confrontations, starting with the Boston Massacre on March 5, 1770, when five Bostonians - including Irishman Patrick Carr - were shot dead by British soldiers. The tension escalated and came to a head in April 1775 during the Battles of Lexington and Concord, followed by the Battle of Bunker
Post a Comment
Read more

August 10, 2020
John Boyle O'Reilly, one of Boston's most accomplished citizens, died on August 10, 1890 in Hull, Massachusetts, from an accidental overdose of medication. His sudden death marked the end of an amazing life of heroism, advocacy, leadership and literature that helped transform the city and the nation. Arriving in Boston in 1870, O'Reilly spent the next 20 years reconciling the city's racial and ethnic factions who struggled against one another. He became editor and then owner of The Pilot, the leading Irish Catholic paper in America, using the paper as a bully pulpit to advance various causes. He befriended the Yankee establishment while admonishing them for the prejudices. O'Reilly defended American Blacks who were still looking for post Civil War equality. He welcomed new immigrants such as Italians, Jews and Chinese, insisting that they get the same privileges as nativist Americans. Throughout his life he pursued freedom of Ireland from Britain, adv
Post a Comment
Read more