John Boyle O'Reilly, one of Boston's most accomplished citizens, died on August 10, 1890 in Hull, Massachusetts, from an accidental overdose of medication.  His sudden death marked the end of an amazing life of heroism, advocacy, leadership and literature that helped transform the city and the nation.

Arriving in Boston in 1870, O'Reilly spent the next 20 years reconciling the city's racial and ethnic factions who struggled against one another.  He became editor and then owner of The Pilot, the leading Irish Catholic paper in America, using the paper as a bully pulpit to advance various causes.  He befriended the Yankee establishment while admonishing them for the prejudices.

O'Reilly defended American Blacks who were still looking for post Civil War equality.  He welcomed new immigrants such as Italians, Jews and Chinese, insisting that they get the same privileges as nativist Americans.  Throughout his life he pursued freedom of Ireland from Britain, advocating for home rule and land reform.

In 1885 he delivered a thunderous speech in defense of the rights of Black citizens at Faneuil Hall before the Massachusetts Colored League.  He said "So long as American citizens and their children are excluded from schools, theaters, hotels, or common conveyances, there ought not to be among those who love justice and liberty any question of race, creed, or color; every heart that beats for humanity beats with the oppressed."

O'Reilly was a popular poet and speaker, often called upon to deliver poems at noteworthy occasions such as the unveiling of the Boston Massacre Monument on Boston Common in 1888. There, he read a poem dedicated to Crispus Attucks,  killed by British soldiers at the Boston Massacre of 1770. Attucks' father was an African slave and his mother an American Indian.

In August, 1889, O'Reilly wrote and delivered a powerful poem, The Pilgrim Fathers, at the dedication to the monument by the same name in Plymouth, MA.

After his death in Hull, O'Reilly was taken back to St. Mary's Church in Charlestown for the funeral, one of the largest in Boston's history. "The greatest of Irish-Americans" is dead, proclaimed The Pilot. 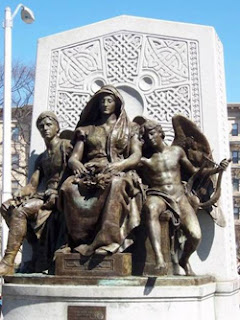 O'Reilly Monument in the Fens

A memorial to O'Reilly was commissioned to noted sculptor and friend Daniel Chester French.   Vice President Adlai Stevenson and hundreds of Boston's prominent and ordinary citizens attended the official unveiling on June 20, 1896. The bust of O'Reilly is set against a Celtic design stone, and the back of the memorial has bronze allegorical figures of Erin, flanked by Poetry and Patriotism. The O'ReillyMemorial is located in Boston's Fens at the intersection of Boylston and Fenway Streets, and is part of Boston’s Irish Heritage Trail.

O'Reilly lived at 34 Winthrop Street in Charlestown, where there is a plaque in his honor.  In 1988 the city dedicated a plaque to O'Reilly in Charlestown at Austin and Main Streets.   City Square Park in Charlestown honors O'Reilly with an inscription and bronze medallion. 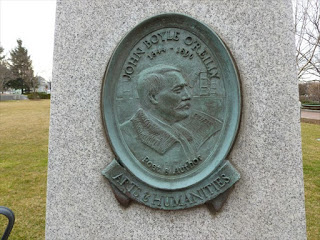 His summer home in Hull is today the town's public library. 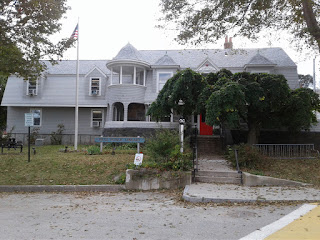 In 1895 sculptor John Donoghue created a bust of his friend O'Reilly: a bronze version is in the Fine Arts Reading Room of the Boston Public Library and one at Boston College's Burns Library.

O'Reilly is buried at Holyhood Cemetery in Brookline, Massachusetts.
Posted by irishboston.blogspot.com at 9:58 AM